In the previous post, I mentioned “Kevin” Hu , a former student of mine, who found me with a web search. Our connection is now complete on WeChat, where he and another classmate are trying to gather more of us together. He’s not been having much luck yet, mostly due to lack of technology 30 years ago.

In 1991, we had no cell phones or computers within our program. What Kevin has to go on is the below list of participants and their addresses, which he kept all these many years and attached in a text message.

It’s definitely a start but China no longer relies much on mailing addresses except for online ordering. Kevin and I also know that updated developments across the country during these past 30 years have been massive. Old city streets completely demolished to make way for high-rise buildings, countryside and small town families moving to bigger cities, and steadfast neighborhoods of old unrecognizable or no longer in existence.

While addresses may no longer exist, the names of participants haven’t changed. From that above list, I do remember that Kevin and his male classmates were incredibly tight. (See Kevin below, second from the left, during a party where he and “the guys” sang an English song to entertain us.)

One of his best buds, I remember, was Daniel Ouyang.

The year they spent together solidified a lifelong friendship. I do remember the two of them were very close, often pairing together as language partners, visiting my home for more English practice time and constantly studying from our textbooks or making a huge effort to take advantage of their full-time study of English.

Kevin mentioned the one classmate he’s kept in contact with over the years was “Daniel” Ouyang.

When Kevin contacted Daniel that he’d found me, Daniel went about setting up our WeChat Nanchang group after messaging me.

His text was much the same surprise note as Kevin’s.

“After 30 years , from Nanchang, do you remember me?” he wrote. “My English name was Daniel.”

We had several notes back and forth, including pictures. Daniel then asked if I’d be available to face-time with him. After checking our time differences, the day was set: evening for me, morning for him, a few weeks ago on a Thursday.

Daniel was sitting in his living room, with his grand-daughter beside him, when he answered my call.  His daughter was beside him and his wife was bustling about on the balcony area, picking tomatoes from her garden plants.  Their home was in a high-rise apartment, neat and tidy with a beautiful embroidered goldfish wall hanging above the couch where he had positioned himself with his phone.

“Tell me all about yourself!” I started.  “Are you teaching now during Covid?”

“No,” Daniel responded. “I couldn’t find a teaching job after I left Nanchang.  I didn’t have the teaching certificate.”

That was true for several in our program.  The stipulation to study for a year had been that enrollment was only for teachers, not for adults wanting to learn English.  However, the difficulty had been that many schools refused to let their teachers go for an entire year.  We needed to fill the program because Amity was insistent that if the organization helped get the foreign teachers, then there had to be at least 30 to make the project worthwhile.  When the number of teachers didn’t reach the desired amount, the provincial government opened up enrollment to others.  Yes, the majority were teachers but we did have a few that weren’t. They paid for their study (housing and materials) on their own with no financial help from the education bureau.  These are the ones I remembered most:  Philip (32, wanting to spend 100% of his time studying to pass his PhD application test  and not bother with teaching), a 17-year-old whose parents wanted her to learn English, a young woman yearning to get out of the countryside and saw English as a means of doing that, and  a few others whose stories escape me.

Interestingly enough, Director Xi, in charge of the Adult Training Center and the supervisor, was careful not to reveal those who were not teachers.  His fear was that Amity would get whiff of it and criticize him.  Donna and I often didn’t find out the truth until months later, and even well into that second semester.  Yes, a few of our students let slip they weren’t really teachers but just hoping to get a better job with their newfound language skills.

Needless to say, this was the case with Daniel.

During our time together, Daniel (age 58) told me that he hasn’t used his English since leaving Nanchang, 30 years ago. He had wanted to get a teaching job but as he didn’t have the education to continue in that profession. He owns his own events staging company.

Whenever companies, schools or organizations hold entertainment or big meeting events, they need staging facilities with high-tech lighting and sound equipment. For such events, private staging companies would be hired to do this. Daniel set up his business with several workers hired to be such an event-planning and staging company. Contests, meetings, celebrations: These are just a few of the events he’s held: 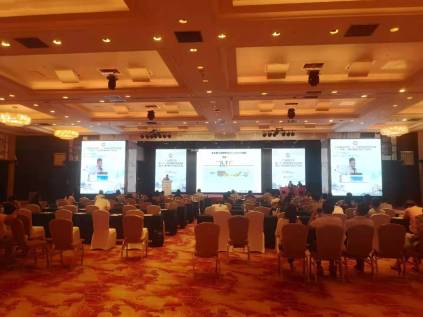 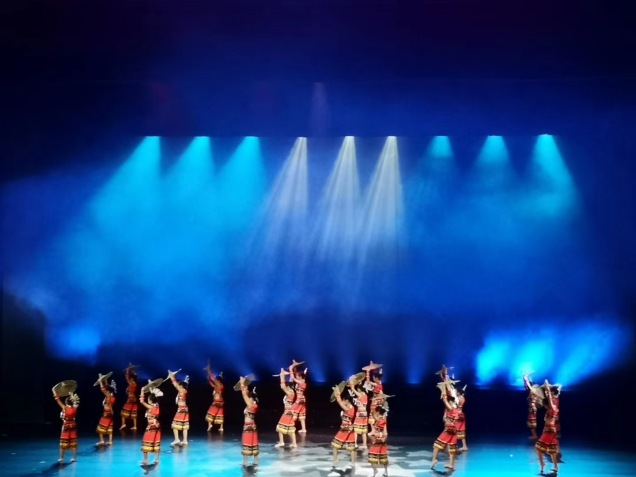 But when Covid became widespread in China, beginning in January 2020, his business stagnated.  No one was allowed to hold big venues.  The country went on lockdown.  He found himself staying at home with his wife, not even visiting much with his daughter and grand-daughter (across town) or his son who was working in another city.

When we spoke on the phone, he mentioned that things have also slowed down as more and more schools, hotels and companies have bought their own equipment for holding such events.  There is no need to hire out anymore so he is considering selling to someone else and retiring.

I will say that his story sounds very similar to my college,  Luzhou Vocational and Technical College.  Before moving to the new campus in 2016, our many departments and student organizations that held contests or special celebrations had a local company they hired which would set up an outside stage and bring in the lighting equipment, recording and sound system plus workers to get everything professionally done.  But when we moved to the new campus, the school bought the necessary equipment needed for such events.  Our huge auditorium came with everything that was needed, thus no need to hire locally.  Event-planning companies who had contracted with our school for years were let go.  It saved the school a lot of money in the long-run but didn’t help support  local businesses as it had before, which was sad.

Before closing, his grand-daughter and daughter popped onto my phone screen.  Both struggled to speak a few English words.  Daniel’s wife quickly entered into the scene, exuberantly saying “Hello!  Hello!”, adding in Chinese her welcome for me to visit when I could finally return to China

Our 22-minute meeting was one I didn’t want to end.  We left with promises of continuing our WeChat texting, of searching for more classmates and Chinese training center staff, of not losing touch ever again.  I’m guessing we’ll have another face-time conversation in the near future.

In the meantime, I’ve been jumping the gun a bit by looking up hotels in Nanchang nearby Jiangxi Normal University.  I don’t recognize the city at all on the websites, nor the university which has merged with another in 2003, but that’s to be expected. So many changes in 3 decades!

Well, even if there are just 5 of us getting together in 2023, it will still be well worth it.

Until next entry, here’s wishing you peace (平安), ping-ahn, for your upcoming week.

I have been in the Asia region for 30 years as an English language teacher. 28 of those have been spent with the Amity Foundation, a Chinese NGO that works in all areas of development for the Chinese people. Amity teachers are placed at small colleges throughout China as instructors of English language majors in the education field. In other words, my students will one day be English teachers themselves in their small villages or towns once they graduate. Currently, this is my 13th year in Luzhou Vocational and Technical College. The college is located in Luzhou city (loo-joe), Sichuan Province, a metropolis of 5 million people located next to the Yangtze River .
View all posts by connieinchina →
This entry was posted in A 30-plus Year Reunion in China, China, Luzhou, Tales from Sichuan's Yangtze Rivertown, Tales of China, Travel, Waiting it out during Covid. Bookmark the permalink.