A 30-plus Year Reunion in the Works

This WordPress blog is mostly viewed by American friends.  But on rare occasions, I get a surprise note from someone who has found me after many years.

“Teacher Connie, this is Kevin Hu,” read my inbox.  “I was your student in Nanchang,  30 years ago.  Do you remember me?”

How could I possibly forget one of my first students in China?! 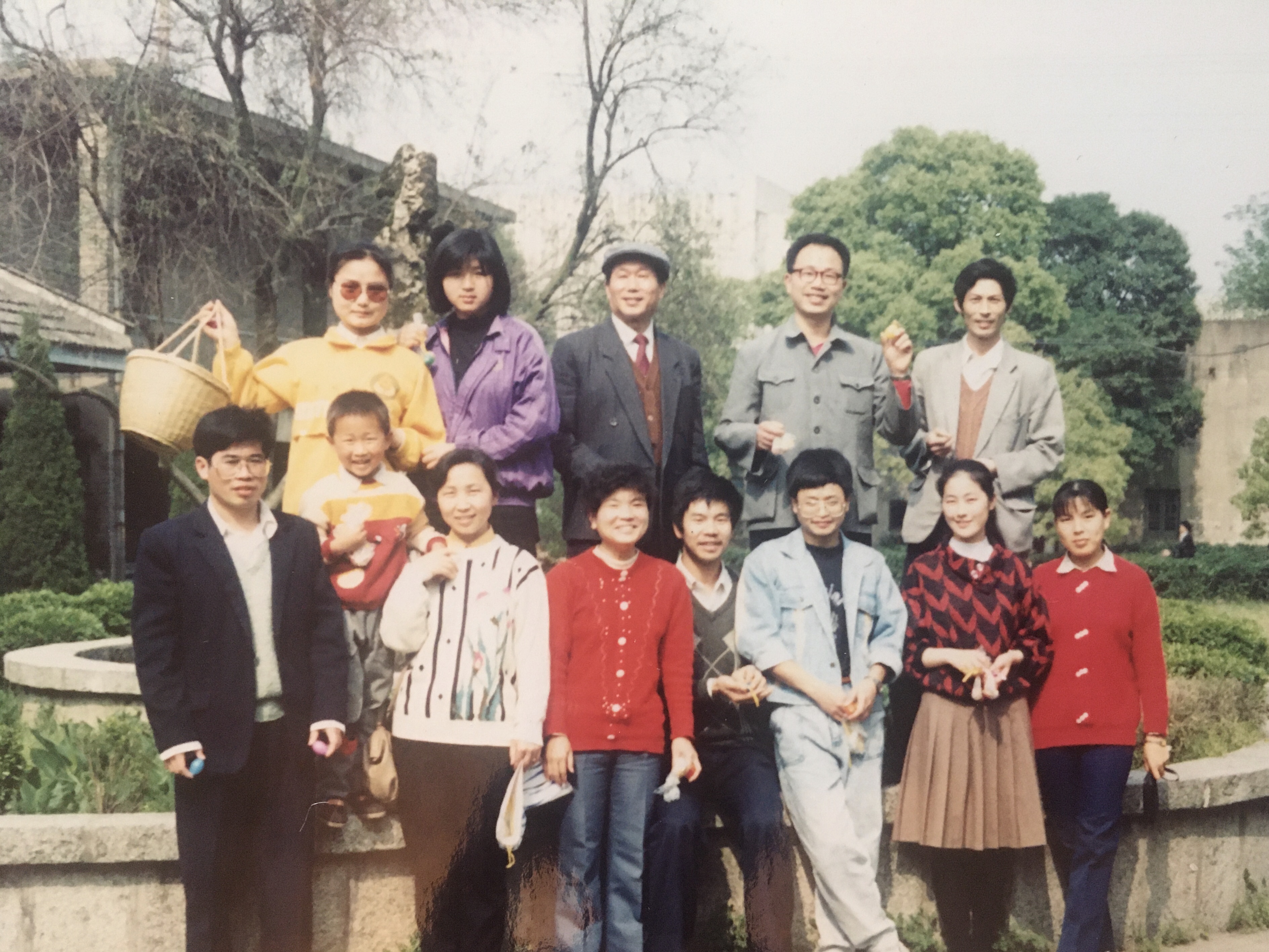 Kevin (second photo, first row, seated in vest, middle) and his 29 adult classmates were teachers from the rural countryside.  The 1-year program he was enrolled in, sponsored by the provincial government  and  the Amity Foundation, was created specifically for language educators from poor areas.

At that time in China, many teachers had had little more than a year or two of college education due to the Cultural Revolution. That time period of 10 years had educated no one except in the teachings of Chairman Mao. Schools and colleges did little in basic education or teaching skills. Just indoctrination of China’s Communist Party greatness with young Red Guards marching about, making signs and reporting, punishing and ridiculing those adults whom they deemed the insidious capitalists. When this devastating time period ended in 1979, China realized they had no qualified teachers to instruct the youth. Crash courses ensued for teachers in numerous subject areas, with the brightest young people (some of them as young as 14) chosen to study under the expertise of previously criticized educators.

For those who became English teachers, their language skills were especially limited. No foreign teachers (actually, very few foreigners at all) had been in China to teach them in those early years of the Deng Xiaoping’s Open Door Policy, which ended the Cultural Revolution’s grip on the country. Most students had just stumbled along in their language studies, some excelling while others floundered

Thus began Amity’s teaching program, which was created in 1986 under the request of provincial education bureaus throughout China. In partnership with Chinese colleges being the hosts, and funding from the provincial education departments, the Amity Foundation helped to bring foreigners to China for 2 years to teach English at Normal colleges or adult education training centers. There was also a language request for Japanese teachers, which Amity also provided from Japan.

Newbies to China: The Foreigners Arrive

In 1991, six overseas teachers (myself, American Donna Brown, Brits Anne and Mick Kavanaugh, Canadians Jeanette and Todd Hanson) came to Jiangxi Province as Amity Foundation English teachers to lead classes in English listening, speaking, writing, teaching methodology and culture. Donna and I were in Nanchang city, Anne and Mick taught at a college 10 miles from the city center and Todd and Jeanette were in Jiujiang, a small town 2-hours train journey from where we lived. Two other Amity teachers from Japan taught Japanese at a college across town from us.

Donna and I were placed in the Adult Training Center at Nanchang Normal University.

Our students, ages 18 to 57, had traveled great distances to commit to this unique learning opportunity.  We all stayed on campus, the students living in somewhat primitive dormitory conditions while we teachers stayed in the gated, quite adequate foriegners guesthouse.  In total, we had 6 Americans with 4 being sent by ELIC, English Language Institute of China. The ELIC were employed to teach the college students and were not involved in our adult program. (Below are 2 ELIC teachers and myself, with our guesthouse workers who cleaned our rooms and took care of Chinese and foreign visitors who stayed at the housing facility for a few nights.) 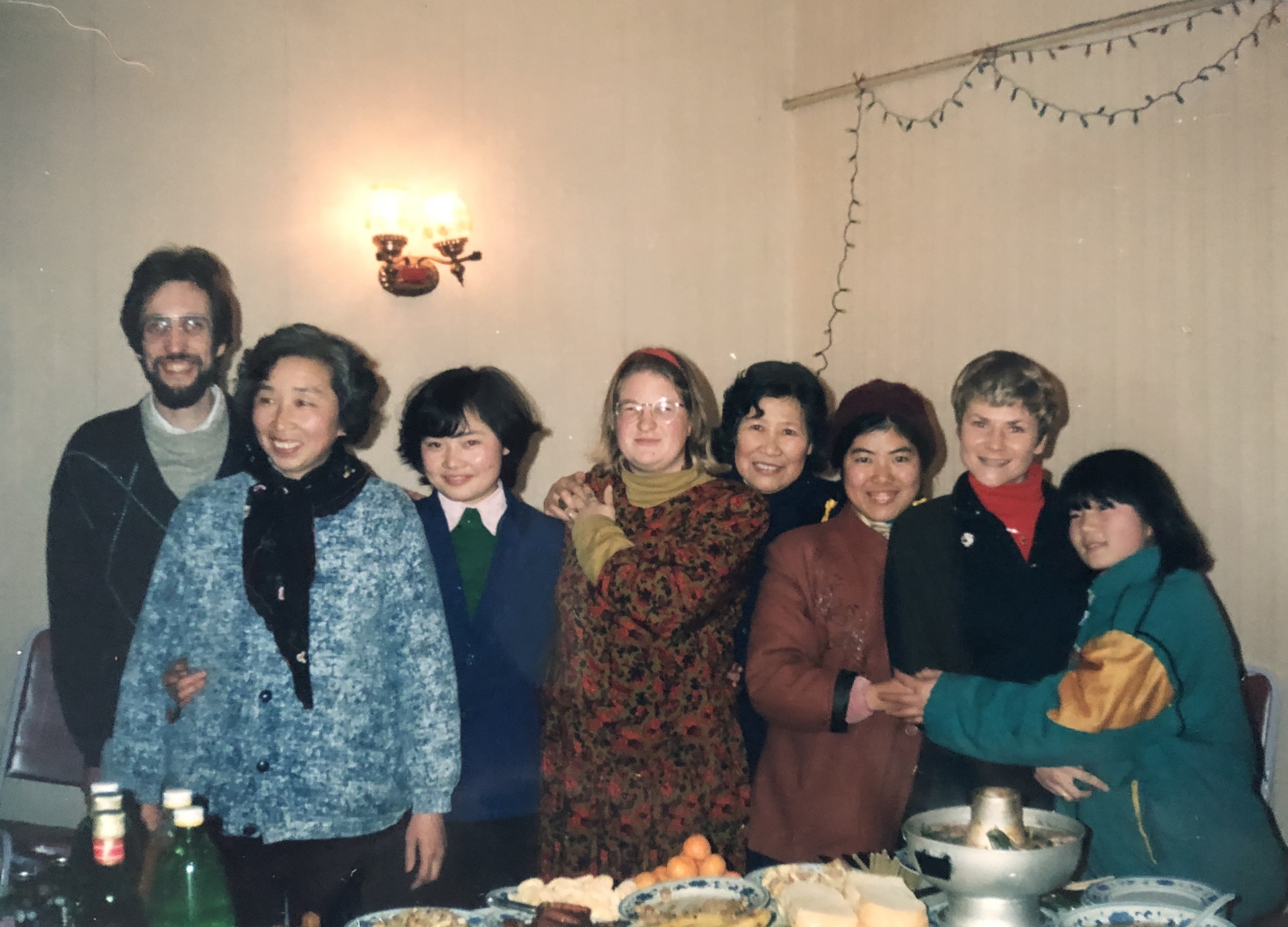 Living Conditions in the Guesthouse:  Adequate and Homey

All the foreign teachers had our own 2-room mini-apartment, with bathroom and a fridgerator, but no cooking facilities.

We had meals served in a communal dining area by a gruff and formidable cook, a former Communist revolutionary war soldier.

The Training Center staff were always very helpful, including booking the university car to pick up our boxes from the local post office downtown. My first year in China, I went overboard in mailing myself 7 boxes from America. Surface mail was still offered, and these took 3 months to reach me. Before leaving for China, I asked those who were already in country what I’d need, thus the 7 boxes you see below. Comfort foods, school supplies, classroom materials, winter clothes, American culture visuals (Halloween, Christmas, Thanksgiving) . . . Even today, I still have some of those same treasured items I used in Nanchang in my apartment in Luzhou, waiting to once again make an appearance in my China classroom.

Like most Chinese, we foreigners had only bicycles to do our shopping around town. I was so proud of mine! A Red Lion (about the only brand in China at that time), which I bought brand new for an equivalent of $25, half my monthly pay. Here I am with my treasured transportation vehicle, in the guesthouse courtyard.

Learning to Be A Family

There was no heat (lows of 10 degrees), no air-conditioning (highs of 90 degrees), no washing machines, no modernized classroom equipment (just a blackboard and the classic cassette tape machine), few usable textbooks, and yet, priceless learning took place.  Despite physical discomforts and our cultural differences, by the end of that year, we had formed a close-knit family.

Kevin and I are now eager to find more former students.  So far, we’ve connected with 5. We are currently working on widening that circle to include those enrolled during my second and third years in that program.  Our plan is to have the classes of ’91, ’92 and ’93 meet for a weekend reunion in the school that hosted us, Nanchang Normal University in Jiangxi Province.  When I return to China, we’ll begin in earnest for a tentative 2023 gathering.  For now, we’re working on increasing that contact list to at least 25, out of a total of about 90 in the program.  With such powerful  technology tools at our fingertips, I’m confident we can get there.

Anyone else out there who remembers us? We’re waiting for you!!

Until next entry, here’s wishing you Peace (平安) for your day.