A Christmas Potluck Dinner of Jubilation

Although Christmas is far behind us, I can’t help but add this note about our last choir gathering for the year 2012.

As is tradition, the choir had a potluck at the church on December 25th to celebrate all our hard work and the birth of Christ.  Everyone brought their favorite dishes to share.  I contributed my homemade cut-out Christmas cookies, a novelty item which caused some dilemma on how to eat.

Finger foods are not in the Chinese food group.  Picking up edible things with your hands is not sanitary, thus the constant use of utensils to serve and eat with.   This was the first time in my life where I saw Christmas cookies nibbled on with chopsticks.  While the method of eating was different, the results were just as I had hoped. Everyone declared my cookies delicious and not a single one was left for me to take home.

After finishing off every dish on the table, pews were pushed aside to indulge in ballroom dancing, later followed by volunteer soloists. At John’s urging, I sang my mother’s favorite solo piece for church, “Go Tell It On the Mountain,” and Robin added a humorous British number about a guard at Buckingham Palace.

Also included in our party activities were Chinese minority dance numbers, quartets and even a “pass the peace” hugging session.   Sprinkled in between our mini performances were our own choir numbers which we all wanted to sing yet again.  Grabbing our folders, we lined ourselves up to do a repeat of the night before with Robin in the lead.  No accompaniment this time so it was all a capella, from Handel to Silent Night to “Ding Dong” and “Merry Christmas.”  While we didn’t sound quite as put together as Christmas Eve, it really didn’t matter.  We sang merely for the joy of singing to the Lord, just as it should be.

Robin and I were thanked again and again for our participation in the service, but we were the ones who were the most grateful. The sincere, heartfelt love we were shown by our Chinese brothers and sisters in Christ gave true meaning to our shared faith.  We were extremely blessed to be a part of it all.

And that pretty much closes off my Christmas reports for 2012, along with the last of our church Christmas photos for you to enjoy.

Ping An (Peace) from Luzhou!

Digging in at our Christmas potluck

Christmas cookies by chopsticks? If they get in your mouth, who cares how!

Photo sessions followed our dinner. I’m showing off my new earrings, sent from my mom, which were greatly admired. 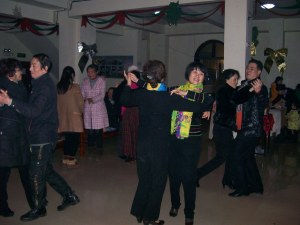 After pews were pushed aside, many worked off all the food they’d eatten by ballroom dancing to Christmas music. 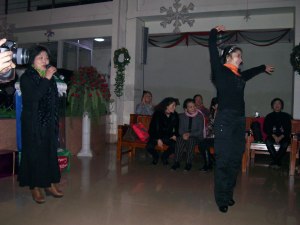 Invitations to sing and dance followed. 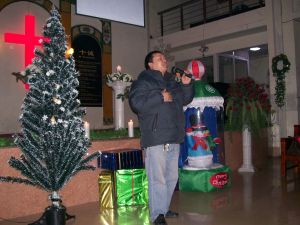 One of our members shares with us a ballad from the Mao minority people.

A Chinese countryside work song, with boy-girl bantering, was one of our favorites.

Closing off the evening in prayer

I have been in the Asia region for 30 years as an English language teacher. 28 of those have been spent with the Amity Foundation, a Chinese NGO that works in all areas of development for the Chinese people. Amity teachers are placed at small colleges throughout China as instructors of English language majors in the education field. In other words, my students will one day be English teachers themselves in their small villages or towns once they graduate. Currently, this is my 13th year in Luzhou Vocational and Technical College. The college is located in Luzhou city (loo-joe), Sichuan Province, a metropolis of 5 million people located next to the Yangtze River .
View all posts by connieinchina →
This entry was posted in Tales from Sichuan's Yangtze Rivertown, Luzhou, Tales from The Yangtze River. Bookmark the permalink.

1 Response to A Christmas Potluck Dinner of Jubilation