Posted on January 9, 2013 by connieinchina

After 10 days away for a wedding and some R&R in the city of Chengdu, I am back in Luzhou to close off the school year.  Our college students will be taking their finals for the next 2 weeks before being dismissed for their Chinese New Year holidays.  My testing is completed already so for now, it’s calculating grades to turn in, putting away Christmas decorations and packing up the luggage to spend time with my folks during my vacation.

Last I left off, Christmas celebrations were finished but not the grand report of our Luzhou church choir performance and the events thereafter.  Let me give you a few notes of our Christmas Eve services and then our Christmas Day choir party that followed.

As members of the choir, everyone arrived early for the 7:30 p.m. start to our evening but the church was already packed long before then.  It’s always a wise decision to come early for Christmas celebrations in the Chinese church.  Not only do church members fill the pews and balconies but outsiders as well, curious about what Christmas Eve is all about for Christians. 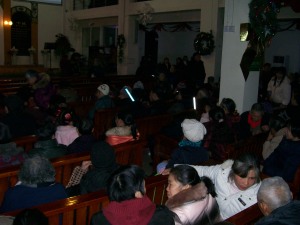 Many come early if they want to find a good seat.

Strangely enough, the streets of Luzhou were bustling with people on Christmas Eve to count down the minutes to midnight despite the fact that none were Christians.  This has become an interesting trend across the country where stores stay open until after midnight, have huge sales and get people started very early for  their Chinese New Year shopping sprees.

Oversized inflatable hammers, which often hits the Chinese Christmas scene, were another big item for sale.  These are used to strike one another over the head when Christmas comes at the stroke of 12.   That bizarre custom became popular about 10 years ago.  While it doesn’t have the mob following it once did, it still seems to be something a few in the crowds still find great pleasure in doing to those standing nearby.

Some of the holiday paraphernalia sellers positioned themselves outside of the church, thinking many Christians would buy such things just like their non-believer counterparts. 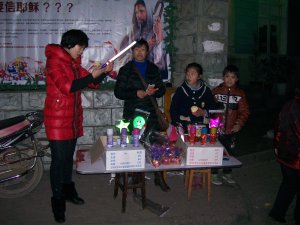 Here is one of several sellers with their Christmas items outside of the church entrance. Flashing wand, anyone?

Those hoping to cash in on our church Christmas Eve service were extremely disappointed. They learned in a hurry that, as Christians, these silly toys are not something that we use for our celebrations. Their best customers were parents,  who brought their kids to take a look at what was going on in the church.  Such visits by the very young are always treasured and the Christian ushers make sure the children are looked after, trying to find them a place to see the service and understand what Christmas really means to those of our faith.

One of my departmental colleagues brought his little girl to our service see how Christians celebrate Christ’s birth.

Me and little “Annie” Zhou in the balcony together, waiting for the choir’s turn to perform.

The evening was divided into 3 parts:   Worship (50 minutes), Thanksgiving (2 1/2 hours of performances) and Praise (1 hour of praise songs with praise band, testimonials and prayers counting down to midnight.)

Our choir was placed in both the worship (John as our director) and later the Thanksgiving service (with Robin).

My original intent had been to only join the choir for Robin’s bit but since I had practiced all the anthems and hymns for the worship, I decided I might as well join in.

When John warned me that we’d be standing on the risers, in front of everyone, for the entire worship and not allowed to leave, I thought I could manage it.  I’d often seen the choir in the past stand for such a long time without difficulty.  How hard could it be?

What I hadn’t planned on were the hot, glaring spot lights that were on us the entire time, or that I was layered in clothes since we have no heat in the church.  Under our thin robes, I needed those extra thermal underthings until I was positioned behind the pulpit with everyone else under steaming stage lights.

Things started to heat up in a hurry.

Our first 4 numbers were at the beginning, before Pastor Liao launched into her sermon, so we all did very well for those. Our big number, Prince of Peace in Korean, which is a beautiful number and one we’d been looking forward to sharing with everyone, was at the end of worship along with an original Chinese anthem John wrote himself.

When Pastor Liao began speaking at 8 p.m., we had already been up there for 15 minutes.  John had explained to our pastor that the choir members couldn’t stand for very long so keep the message short, 10 – 15 minutes at the most.  But with so many newcomers to the Chinese church, curious people who had never heard the word of God nor ever been inside a church before, the spirit moved her to continue on . . . and on . . . and on about God’s everlasting love and the need for all to embrace that.  She even broke into song at one point, adding an extra 5 minutes when she invited everyone to join in.

After 25 minutes, with my head spinning and me seeing spots, I had to quietly step down from my place in the second row and have a seat behind a column next to the pulpit.  As a foreigner in an all-Chinese choir, I already was quite conspicuous. I didn’t need to make myself known even more by passing out in front of everyone!

I did come back for our final numbers after Pastor Liao had finished but by that time, the other choir members were also feeling the effects of standing for so long.  Our big numbers fell flat, musically and figuratively, as no one could muster up enough energy to sing them.

Despite our worship service problems, we had plenty of time to recuperate during the next 2 1/2 hours Thanksgiving time.  We were placed last on the performance list to make a grand showing under Robin’s direction.

Before our turn, choir robes were whisked off replaced by Santa hats and scarves for our second singing venture. We then found places to stand or sit while we watched children, teens, elderly and others praise the Lord in their special way.  I spent some time in the balcony but finally found a front row seat with the sound system guy so I could take plenty of photo close-ups for my website.

When it came time for our English carols and Hallelujah Chorus, we were in top form.   We sounded great!  Or that’s what we all agreed on after we’d finished.

I can’t really say what the Chinese thought about any of our musical efforts.  It was their first time to experience all-English Christmas carols as well as Handel.  John gave a Chinese introduction to The Messiah to our audience, including telling them they had to stand while this was being sung.  They were a bit puzzled but did so anyway.

I did steal glances at our listeners’ faces during the performance.  Most looked rather dazed and stunned, not quite sure what to make of it.  I did see one trained singer in the front row, her face glowing in joy while singing along with us.  If nothing else, there’s one who enjoyed herself.  I know for a fact we all certainly did!

End to the Night

The evening closed off with the praise team, which led those present (mostly younger folk) in song and prayer before midnight.  The choir was done by then but we still had one more  gathering before 2013, a potluck on Christmas Day in the evening.  I’ll post pictures of all the fun we had in another blog.

Getting ready in the upstairs’ choir room

One of our emcees (She’ll lose the coat before appearing before the audience.) 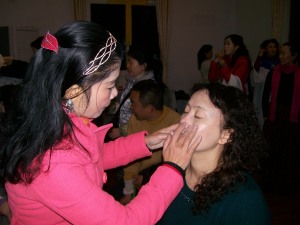 Chinese rarely, if ever, wear make-up but for the stage? An absolute must!  Here one of our choir members gets a nice layering of foundation before rouge, eye shadow and lipstick.

All were welcome to the service, including our doggie visitors. 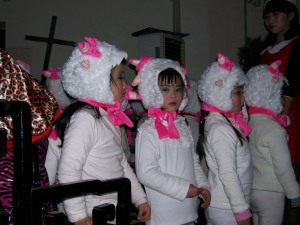 First up for the Thanksgiving service performances, the “little sheep.”

From the balcony, the “little sheep” children’s dance number. 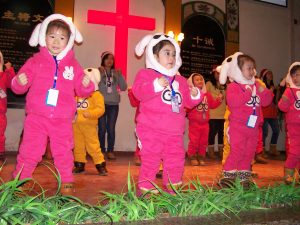 Our retired women’s choir gives praise to the Lord.

Time for
“Scarborough Fair”. Much better than during rehearsals! 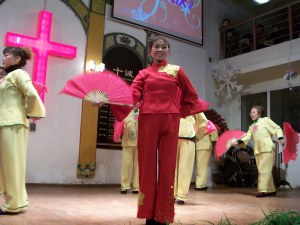 The church elderly with their Chinese fan dance routine.

You’ve heard of the 3 tenors. Here we have the 3 sopranos, each vying for the spotlight. 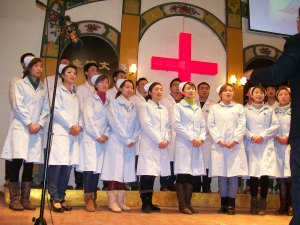 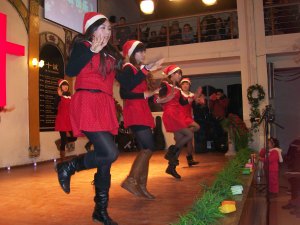 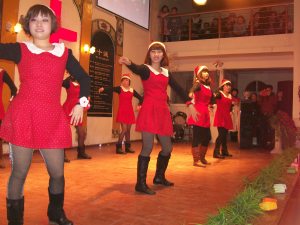 Things got a little out of control once Santa began throwing candy.

A grand ending to our performance service — Mob the Santa!

Some merry Merry Christmas shots before beginning the countdown to midnight. 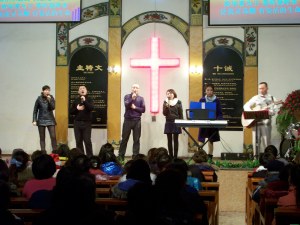 Our praise team leads the last hour of our Christmas celebrations.

I have been in the Asia region for 30 years as an English language teacher. 28 of those have been spent with the Amity Foundation, a Chinese NGO that works in all areas of development for the Chinese people. Amity teachers are placed at small colleges throughout China as instructors of English language majors in the education field. In other words, my students will one day be English teachers themselves in their small villages or towns once they graduate. Currently, this is my 13th year in Luzhou Vocational and Technical College. The college is located in Luzhou city (loo-joe), Sichuan Province, a metropolis of 5 million people located next to the Yangtze River .
View all posts by connieinchina →
This entry was posted in Luzhou: Yangtze Rivertown Stories, Tales from Sichuan's Yangtze Rivertown, Luzhou. Bookmark the permalink.