We’re going on 2 1/2 years now that I’ve been stuck in America. China’s strict “Zero Covid” stance is actually starting to lift, as of June! Large cities throughout China, and even those in my province of Sichuan, are now allowing schools to issue invitations.

Sad to say, however, small Luzhou is being VERY cautious. I just keep hoping that this summer might finally convince local government officials that Connie can return.

Questions Abounded from Friends and Family

In the beginning of being stranded, people would ask me when I was returning, what kinds of supplies I’d like to take back with me, who was teaching my students, was I in contact with my friends, my school, my Chinese church choir (Yes, daily!) . . . The list goes on.

But one of the most common questions I received was this one: “What about your apartment and all your things? Are you paying rent all this time?!”

No, I am NOT paying rent.

I live on the campus of my school in the 11-story single teachers’ housing building. Although it was originally built for single teachers, it ended up that families also were allotted space to live there. An outer room, 2 bedrooms, a bathroom and kitchen area made it a tight squeeze for our married couples who had one or two children, plus grandma and/or grandpa also staying with them, but it was do-able.

While those staying in the building are required to pay 1,000 yuan a month (roughly $170 US), with extra for utilities, as a foreign teacher, my cost for everything was taken care of. This is almost always a perk for overseas teachers in China: apartment rentals (on or off campus) are fully paid for by the employing school, sometimes even offering options to find your own apartment for X-amount of money which the institution will cover within reason. This has never been my case but I do know of other foreign teachers who have opted for the latter, which has given them an opportunity to pick what they personally would like rather than have a Chinese staff member choose.

I am in constant contact with my school, still waiting for the local government to give permission for my invitation letter to be processed. Our new Foreign Affairs assistant is a former English teacher whose position has been changed. That person is Ms. Xiao, whose English name is Cherry.

Here is her message to me 3 days ago considering the news that other cities in Sichuan are now open to teachers having their employment papers processed.

“Please be patient. I believe our city will gradually open up the policy and let you back to the school as soon as possible.”

She continued onward in the next text segment with this:
“Here’s another thing. Your luggage and some things are still in our dormitory, right? Now our dormitory will be moved to another new teacher’s apartment not far from th school. We need to ask for your opinion on whether we can move your luggage to another dormitory (we will make a video recording for the whole process.). If you don’t want to, please feel free to let me know.”

So it seems that the school invested in reserving apartments in the nearby new complex for more senior Chinese teachers to move into and pay rent on. This apartment complex had just begun being built a few months before I left for my vacation in January, 2020, when I then became stranded in the States. Many teachers had been offered a buy-in before the completion of the high-rise buildings as well as the school vouching with a reputable loan company for those payments. Downpayment was 20,000 yuan ($3,500 US) with the smallest units selling for a total of $60,000 US (the empty cement shell without any decorating). While that sounds like a lot of money for a poor college teacher making roughly $650 a month, those living in my apartment building had been saving for years for such an offer. The proximity to the school campus was great, without any commuting time, and the school had vouched for their loans so quite a few were happy with the arrangments.

I certainly was impressed watching the buildings go up, thinking how nice that might be for me to live in those. 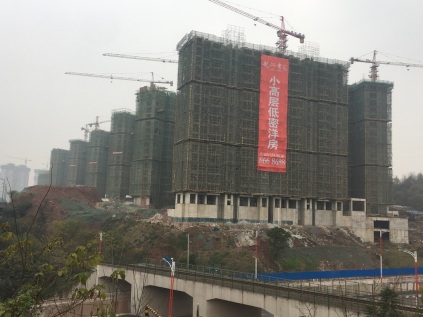 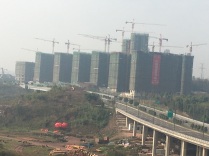 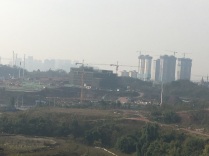 I doubted the school would ever consider preparing such a nice place for me. But maybe think again!

“To Move or Not to Move?”: That question has no options

Considering all my stuff of 20-years-worth of living in China, and furniture, and SO many clothes, and appliances, kitchen utensils, books (good grief!!) and drawers needing to be weeded through, plus the fact that for every move I’ve made, it’s been a 100 large box affair (I always had students help tape together my 100 boxes for me to fill), what do you think my answer was?

A very appreciative response of: “Thank you so much for asking but I think it’s just too much trouble for you and the school. I’ll pass until I can return.”

My guess is that Cherry is very relieved not to deal with packing up my things, hiring movers (which the school must pay for) then overseeing the entirety of the move from a campus building to an off-campus one. I also have no idea what floor I’d be on, meaning holding up elevators numerous times as boxes were loaded and unloaded onto the appropriate story.

I’m also not 100% certain I’d like to move off-campus. At present, it’s always taken me 10 minutes to walk to my classrooms, whereas off campus it would be more like 20-25. Still close but not as close as the apartment I’m living in now.

So reiterating what I told Cherry: I’ll pass until I can return. (What a happy day that will be!)