Posted on August 8, 2020 by connieinchina 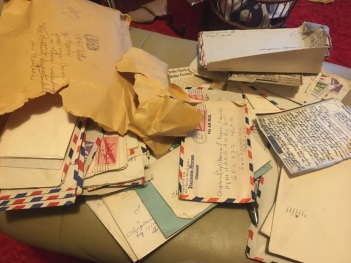 Previously, I mentioned I’d been going through the World War II correspondence between my grandmother, Connie Maris in Holland, Michigan, and her husband, Chaplain (Captain) Marvin E. Maris, serving overseas’ in New Guinea and the Philippines from 1944 – 1945 (Below is my grandfather’s sketch of his Pacific service journey.) 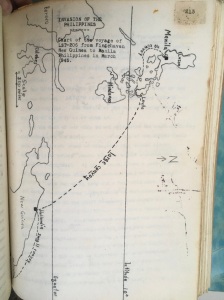 Connie’s daily letter-writing habits detailed her many activities as a young mother of two,  the local town’s goings-on, church happenings (she was very active in the Holland Methodist Church), and tons of gossip, all interspersed with her varied thoughts, observations and feelings on all kinds of subject matter.  I remember Grandmother Connie was never one to hold opinions to herself.  I see that, in her younger years, that held true as well from the letters I’ve been reading.

As the 75th anniversary arrives of the bombing of Hiroshima and Nagasaki, as well as the ending of World War II (V-J Day, August 15, 1945), I’d like to share in this post two letters written from Connie to Marvin.  Both were composed while she was attending a 1-week Christian retreat camp at Lake Louise, located in Johannesburg, Michigan.  This was 215 miles from Holland, where she was living while waiting for her husband to come home from the war.  Connie had volunteered to be one of the counselors for the young girls and also the leader for several adult Bible study groups.  My mom was attending as well, age 12, and my uncle, age 7.

Before launching into the letters, I’m including a bit of information regarding the camp and its ties to Christianity and Methodism.

In 1934, the Horner family approached their pastor, Rev. Stanley Niles, desiring to give these lands away. Together, the Horners and Rev. Niles envisioned a youth camp and cottage sites for clergy families surrounding the lake.

They created Lake Louise Christian Community, a 501(c)3 non-profit organization, to receive the gift and hold the land in trust for the two United Methodist Michigan conferences, and by extension, all Michigan Methodists. Yet the current ministry transcends traditional Christian denominational lines, welcoming all persons of Christian faith, and seeks to offer an environment in which all persons feel welcome, regardless of faith tradition.

The transformational camping experiences of children, youth, and adults of the Methodist Church linger in their memories and continue forming their lives and faith long after they leave.

My Reflections to the Above

When my grandmother’s camp experience took place, the facility must have been quite new in 1945, having been built with additions during the 9 years since it was established.  Connie mentioned participants staying in cabins and I read on the Lake Louise website  that Tennant Chapel  was later built in the 1950s. The chapel , which is fully functional today, seats approximately 160 people and has a sound system and piano.  Not sure what my grandmother’s worship experiences were like but I doubt a fully equipped chapel with sound system was available.

Back to the Letters:  My Grandmother Writes about The Atomic Bomb 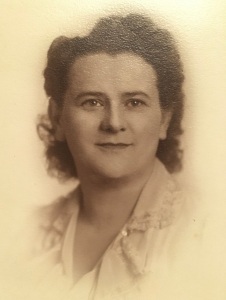 It was during this week at camp when world history was made. How very telling that her closing remarks on the atomic bomb echo much the same sentiment many of us have today, 75 years later.   She writes as follows:

Note:   M.M. is Marvin Maris, my grandfather. Ed Dixon is one of the study leaders,  held as a POW (Prisoner of War) before being repatriated.  I was saddened concerning the derogatory remark my grandmother made concerning the Japanese (“the Japs,” she calls them) but I include it unedited.  Those are my grandmother’s words and reveal the sentiment of the times, that of animosity toward an Asian country  that started the war and whose military perpetuated inhumane conditions, treating POW’s with disdain, scorn and contempt.

It’s a lovely warm day.  The baseball game between faculty and kids was won by the kids so now tomorrow, we’ll see a bunch of crippled old men!!

Just had a nice talk with Ed Dixon.  He sure has done things.  Spent 50 days in solitary confinement at first because the Japs thought he was a spy and then was secondly placed with the British 1 1/2 years, allowed to walk around, etc., and then was 6 months in a concentration camp before being repatriated.  It makes me feel very humble to talk to a man like that.  I seem to be marking time and doing little. You are doing for the family.

All my love, dearest one, and I’ll write later — 50 gals milling around so I’ll quit as they make noise.  All my love, Connie

Here we sit and wait for the news that the war is over.  Everyone is jittery but it doesn’t keep much to be impatient. I wonder how anyone can shout and celebrate – there has been too much destruction and chaos.  I haven’t too much faith in man and what he can do anymore.  This atomic bomb – might well be used against us in time. We are too smart!

I don’t think I can hardly tell you what all I gained at the camp this week. You know the spirit there was unusual.  You expect horsing around and all the rest but somehow, thru all the fun and laughter, there was the undercurrent of thoughtfulness. There was no emotionalism but a fine experience living together.  Ed Dixon gave us four points which he says he got out of his personal Pentecost in a Japanese prison.

1- The Bible wears well — it satisfies man’s hungry (Man cannot live by bread alone!). His fare consisted of rice and a little cabbage soup.  2- God answers prayer. 3- The value of little things.  He said that he had always taken a chair for granted but he had none. A tea cup became a symbol of that value. It comforted him as he held it filled with hot water in his hands and as he drank from it.  4 – Jesus is utterly adequate.

I had quite a talk with him just before we left for home.   I most certainly got a lot from him.  As I was talking about the re-establishing of our home, I asked him how it was for him coming back after over 2 years in a prison concentration camp.  He said that it was a hard thing for him to adjust himself to being patient with the children and thoughtful of Esther — he’d been out for himself for so long.

Marriage, to him, is a triangle – husband and wife and God.  When we try to solve our difficulties without the peak of the triangle, we are pretty apt to get into difficulties.  I know I’ve been a difficult person to live with and I don’t promise any great change but I am trying to be more patient and understanding.  Maybe that will help some.

Those of us who have our men away just put our heads down and cried when the announcement came Friday at dinner that peace negotiations were started.  If you get a chance to go to China or Japan or wherever before coming home, I won’t blame you at all for taking it.  I know that you’ll likely never get over again and what you see now, you’ll always have. We can wait and understand.  If you get home – OK, too.  You know we’re waiting as anxiously as the next one.

By the time this reaches you, maybe this terrible war will be over.  I am horrified by the atomic bomb.  Is that what being civilized does?  If the wrong parties get it before we can discover a good use for that power, I can think of no hope for us all.

Now I’ll eat my breakfast and do some work. My prayers go winging along with this–

I have been in the Asia region for 30 years as an English language teacher. 28 of those have been spent with the Amity Foundation, a Chinese NGO that works in all areas of development for the Chinese people. Amity teachers are placed at small colleges throughout China as instructors of English language majors in the education field. In other words, my students will one day be English teachers themselves in their small villages or towns once they graduate. Currently, this is my 13th year in Luzhou Vocational and Technical College. The college is located in Luzhou city (loo-joe), Sichuan Province, a metropolis of 5 million people located next to the Yangtze River .
View all posts by connieinchina →
This entry was posted in 75th anniversary of dropping the Atomic bomb, A Visit Home to America, Michigan in 1945, Michigan's Lake Louise: A look back in time, Travel, World War 2 Letters, WW 2 Letters: My grandmother writes, WW 2: VJ Day. Bookmark the permalink.