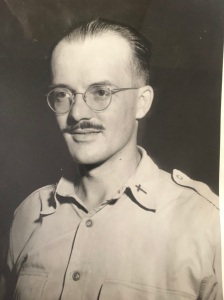 In the previous entry, I mentioned my grandfather’s role as an Army Chaplain overseas had him wearing many hats.  Not only was he tasked with the spiritual morale of the troops but also officiating over funerals, where it became his duty to write words of condolence to grieving family members.  (See previous post)

A Request for Peace of Mind

Tucked in Chaplain Maris’ letters to his wife I found yet another letter from a soldier’s mother.  It was such a fascinating read, and one which truly endeared me to its writer, Mrs. D.B. Dana, whose given name was Olga.

Olga’s cordial plea to my grandfather was so eloquently and thoughtfully written, with such an easy, newsy, humorous air about it, that I couldn’t resist including it here.  Olga must have been quite a woman:  married to a doctor, 3 sons in the war, a student at the Chicago Institute of Art, educated and well-learned, as well as a giving person who wished to serve others in any way she could.

As you read her letter, you’ll discover why she has found a special place in my heart.  In fact, I felt so connected to this woman that I did some digging concerning John Dana.   That mystery I’ll share with you in the next entry.

In the meantime, let me introduce you to Mrs. D.B. Dana (Olga), a woman whose words must have touched my grandfather just as much as they did me or he wouldn’t have kept her letter. 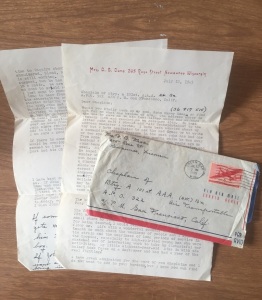 Would you kindly look up my son, John Haney Dana (36 -817-515) or find out for me what has become of him.  The address above is the one he gave me in his last letter which was written on January 24th and reached me on February 15th.  In that letter, John said I should add “Air Transportable” to the address whenever I wrote.

I have been worried about my boy but I have hesitated to ask the Red Cross or to write a command officer because in the past, John has had one or two spells of not writing for months while he was away from home working in Idaho and Panama.  Two years ago, my husband died and my three sons were all in the service, and John began to write to me faithfully, three or four times a week.  His last letter was most affectionate and he said he hoped for a furlough.

This long silence since makes me wonder what happened.  It could be that he thinks it is not necessary to write because his brother has been given a discharge from the Navy because he is ill, but I am still alone as the boy is out in Santa Fe, New Mexico.  John has earned his own way since he was nineteen and been very independent but whenever we have been together, we have had wonderful times and his humor and his spirit have been my delight.  I try to understand such a boy and, no matter what may have happened, I’d stick with my son.  One thing makes me think that something may be wrong — the last two bonds came marked “Pvt. John H. Dana” instead of Sgt.

The fact that John’s allotment of $55.00 was discontinued as of the 28th of February gives me more reason to wonder.  I set small store by rank and if John had done something to call for being demoted, I would regret it but the thing would not floor me.  Life with a wonderful country doctor husband has taught me much about the weakness of people and I appreciate the strain and the weariness of long periods of service in the tropics, especially to high-spirited young men who were snatched out of interesting work to take up distasteful war activities.  My little eighteen-year-old Mike is with the Halsey task forces on a destroyer and has had a year of the real fighting!

I have great admiration for the work of you chaplains and I do not want to add to your burdens, but I hope you can find time to inquire about my boy.  He is 6 ‘ 11″, heavy, broad-shouldered, blond,blue-eyed and he has a nice smile, if that is still working.  He neglects attendance at church, I suspect, but he has a background of church-going and singing in a choir.  We are Congregationalists.  I know it would do no good to scold John as he is touchy and would resent it. I just want to know what has happened to him and, of course, I long to hear from him.  I certainly miss the bolstering of his entertaining and lovely letters. I hope he has not started drinking or become irresponsible.  Before going into the army, John had a very fine job representing the Kewaunee Manufacturing Company in New York State and he had headquarters in Syracuse, New York.  He did a big piece of work on two large hospital installations of laboratory furniture in Canal Zone hospitals just before he was drafted.  The companies anxious to have John back and they are worried, too, over no word from John.  Not one person I know has heard from John since February.  If the boy is in wrong, I do not wish to add to his trouble and that is why I am writing you because I am sure a good chaplain has an understanding heart.

If there is something I could send you to help a little, I would be overjoyed to do so.  Do you need books?  My sons seemed to like cartoon books, art books et cheer.  John had just had his Christmas mail when he last wrote.

I have kept on writing to John all this time and I shall do so.  If John has not had word from me, tell him I am now at home and shall be here from now on.  I studied at the Art Institute of Chicago all winter but came back at Eater.  I lived at the Palmer House in Chicago and they forward mail that comes for me there so I doubt that any letters were lost.  Doctor Dana used to say, when people were in trouble, “This is today, we start from here to do better.  No vain regrets!”  I want John to remember that philosophy if he sees it.

If some boy in your outfit never gets mail, I’d be glad to send him things, especially a sick boy.  If John has been demoted, I do not want a report on it, just to get started being in touch again.

(Mystery of John’s disappearance solved?  To Be continued!)

I have been in the Asia region for 30 years as an English language teacher. 28 of those have been spent with the Amity Foundation, a Chinese NGO that works in all areas of development for the Chinese people. Amity teachers are placed at small colleges throughout China as instructors of English language majors in the education field. In other words, my students will one day be English teachers themselves in their small villages or towns once they graduate. Currently, this is my 13th year in Luzhou Vocational and Technical College. The college is located in Luzhou city (loo-joe), Sichuan Province, a metropolis of 5 million people located next to the Yangtze River .
View all posts by connieinchina →
This entry was posted in A Message of Faith, a Veteran, A Visit Home to America, Michigan in 1945, Travel, Visit To The States, World War 2 Letters. Bookmark the permalink.