Walk with Me: My mom’s weekly Column 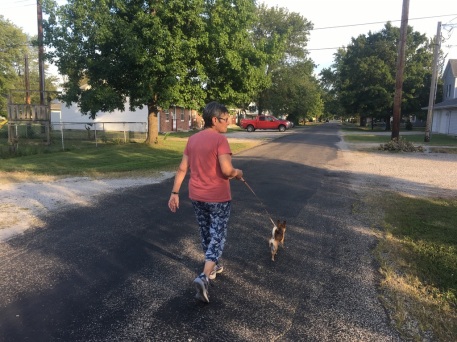 Now that the days are getting a bit warmer, dog and I are walking earlier in the morning but getting home later. That is because of all the stop and talks. There seem to be more folks about at our earlier than usual hour. Also, now that more progress on my “new” house is taking place , I feel the need to stop by to note the improvement updates. Hopefully, some time this summer I can become the occupant of that much smaller dwelling. In the meanwhile, I am still weeding at the big house, taking care of perennials and trying to resist all those lovely annuals the garden shops are now offering. 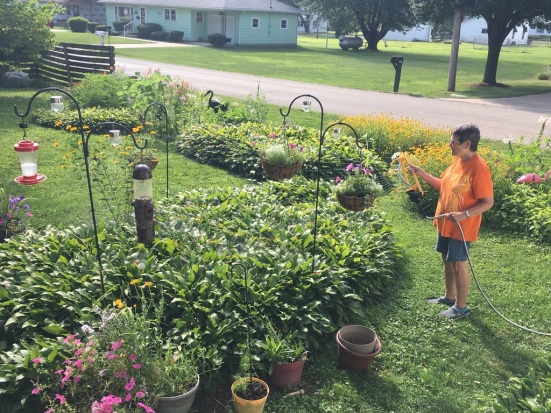 We sidewalk walkers are enjoying the well kept yards and gardens around town. The weather hasn’t been too cooperative so far, but we have managed to get around despite all that wind and rain. The “we”are Bridget, my dog, and Connie, my daughter. Connie will be with us for some time as the visa that enables her to return to her teaching position in China has been suspended temporarily because of the virus. She is doing her teaching on line in cooperation with the Chinese teachers and may return there sometime in the fall.

Thanks to all who have asked about my house move and Connie’s return to China. It is good to know that people care about and are interested in what is going on in our lives. We all seem to value and enjoy smalltown ‘small talk.’  Besides, who among us doesn’t like a bit of local news that we can pass along?

Now, as to this week’s Yesterdish.  When I was in 7th grade Home Economics class in Holland, Michigan, one of our projects was cooking up a concoction called “Eggs Ala Goldenrod.”  The name itself seems to have foreign origins but the recipe meets the qualifications as a true American Yesterdish. As exotic as it sounds, it is really just creamed eggs on toast. What a let down. However as a 12-year-old novice cook, I thought that I had achieved some culinary status just by following the recipe, let alone mastering the tricky cream sauce!

Several basic cooking skills were taught during the making of Eggs Ala Goldenrod. They included boiling and peeling eggs, removing the yolks, chopping the whites, making a white cream sauce and grating the egg yolks. The finished product was plated by pouring the white sauce loaded with chopped egg whites over toast points and adding grated egg yolks on top as the final “goldenrod” touch. Quite fancy for a 7th grade Home Economics class, don’t you think? I wonder what Virginia Claypool or Vi Shaffner, our retired Home Economics’ teachers,  would have to say about that recipe. 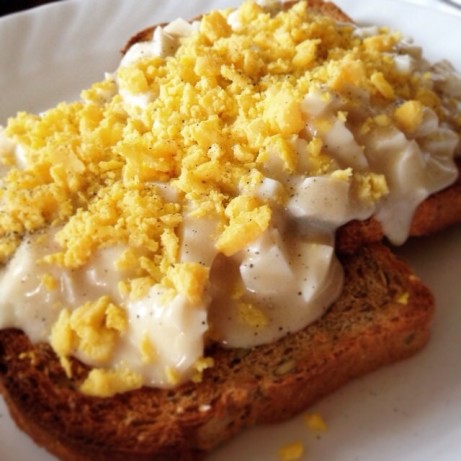 Eggs ala Goldenrod is an old school recipe that, as most culinary researchers note, first appeared in a Fanny Farmer’s Boston Cooking School recipe book in 1886. In the 1930’s and 40’s, this variation of creamed eggs on toast was taught in Home Economic classes all over our country. It even became a traditional Easter breakfast dish for many families. Not in my family however. The only time I recall becoming acquainted with it was in that long ago class. I never much cared for hard boiled eggs anyway, and the added the golden touch didn’t help make them any more appetizing.

However, despite my opinion, over the years this fancy creamed egg recipe has morphed into a way to use up leftovers, common additions being peas, chopped ham, chicken or whatever you have that you want to disguise to get the kids to eat. There are several other second generations of this dish also. Those who were in the service may recall, not so fondly, of chipped beef on toast. It often bears another name but this is a family column so you can figure that out.

Our beloved mid -west favorite of biscuits and gravy has its roots in the creamed egg dish. Another relative is the Welsh Rarebit that my mother often served.  It is a traditional offering featuring a sauce of melted cheese poured over crackers or toasted bread. The Swiss serve something similar as a hot pot with bread as dippers. I am sure you cooks who read this have a stash of your own creamy recipes that are family favorites. Be sure to pass these comfort foods recipes to the younger cooks in your orbit. All of us need all the comfort we can find right now.

“No one is born a great cook—one learns by doing.” — Julia Child

I have been in the Asia region for 18 years as an English language teacher. 13 of those have been spent with the Amity Foundation, a Chinese NGO that works in all areas of development for the Chinese people. Amity teachers are placed at small colleges throughout China as instructors of English language majors in the education field. In other words, my students will one day be English teachers themselves in their small villages or towns once they graduate. Currently, this is my second year in Guangxi Province at the 3-year college, Guangxi Normal University for Nationalities. The college is located in smalltown longzhou, 1 hour from the Vietnam border.
View all posts by connieinchina →
This entry was posted in A Visit Home to America, A Visit Home to Marshall, Illinois, Smalltown American Life, Travel, Walk with Me: My mom's newspaper column. Bookmark the permalink.

1 Response to Walk with Me: My mom’s weekly Column