Final Letter 5: The Reply from Chaplain Marvin Maris in the Philippines 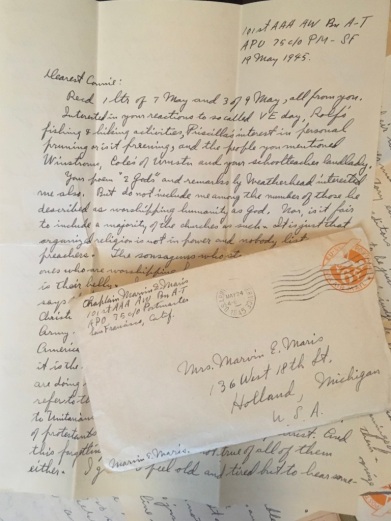 Note:  This letter is copied from the war correspondence between my grandmother (Connie Maris) in Holland, Michigan, and her husband, Chaplain Marvin E. Maris, in the Philippines. He refers to letters from his wife which have been in the previous 4 posts.  This will be the last letter in the series of 5.  Be expecting more letters to follow in future posts as I continue to read through them.

Interested in your reactions to so-called VE Day, Rolf’s fishing and hiking activities, Priscilla’s interest in personal pruning or is it preening, and the people you mentioned:  Winstorms, Cole’s and your schoolteacher landlady.

Naturally, Priscilla will want to read our letters.  Why not?

I will write the Winstroms a letter of appreciation if you say so, my dear.  Tell Rolf I have caught perch, sunfish, speckled bass, blue-gills, dog-fish and bullheads and even one big snapping gurgle but never a sheepshead.  Cut it open; there is a white stone in its head.

—“Saw a well-known figure” :  This most likely would have been General MacArthur, who was in the Philippines at the time of Marvin’s letter. Due to security reasons, I’m sure he wasn’t allowed to give a specific name.

— “the newly announced point system of discharge”:  On May 10, 1945, two days after the unconditional surrender of Germany to the allies on V-E Day, the War Department announced a point system for the demobilization and discharge of Army and Army Air Force enlisted personnel.  The Advanced Service Rating Score was a scoring system that awarded points to a soldier and was used to determine who were sent home first. At the end of the war in Germany and Italy, a total of 85 points was required for a soldier to be allowed to return to the States. If you had less than 85 points, you could expect to continue to serve in the Army and most likely be sent to fight the Japanese.  A few weeks later, the points were lowered to 75, probably soon after Japan surrendered.  Enlisted women were able to return after 44 points.

Points were awarded as follows:

— “Two nights after our historic landing”:  This might refer to the pictures below, labeled and posted in my grandfather’s journal:  March 14, 1945. He illustrated his journal with not only photos but his own drawings.

My grandfather’s drawing to illustrate the invasion route, from New Guinea to the Philippines. 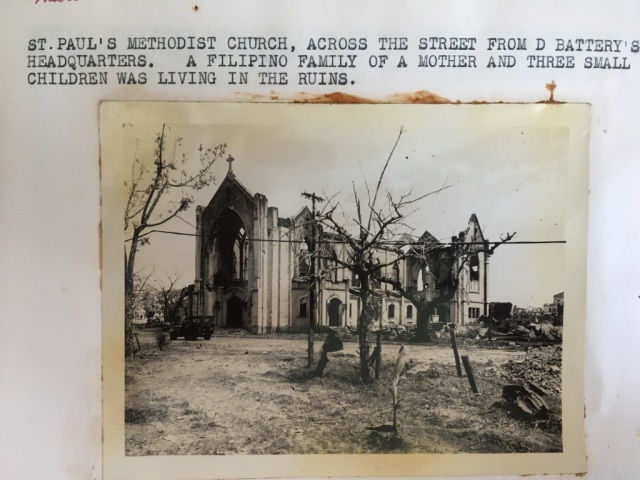 Upon entering Manila, the devastation wrought by the Japanese was a shock to all the Americans who arrived, including my grandfather.

This photo was included in Marvin’s letters from the Philippines, most likely taken during the months of May – September, 1945

I have been in the Asia region for 30 years as an English language teacher. 28 of those have been spent with the Amity Foundation, a Chinese NGO that works in all areas of development for the Chinese people. Amity teachers are placed at small colleges throughout China as instructors of English language majors in the education field. In other words, my students will one day be English teachers themselves in their small villages or towns once they graduate. Currently, this is my 13th year in Luzhou Vocational and Technical College. The college is located in Luzhou city (loo-joe), Sichuan Province, a metropolis of 5 million people located next to the Yangtze River .
View all posts by connieinchina →
This entry was posted in Travel, Uncategorized, Visit To The States, World War 2 Letters, World War 2: VE Day Correspondences. Bookmark the permalink.

1 Response to Final Letter 5: The Reply from Chaplain Marvin Maris in the Philippines