The single teacher’s apartment building I live in, along with the Peace Corp folk, is one of the oldest on campus.  Plumbing is a mess.  Mold is a constant.  Electrical wiring is iffy.
You’ll also remember that during the summer, new gas lines for our burners were installed.  The plastic and rubber lines run every which way on the outside and inside of the building but it’s done and safer than before.

As mentioned before, the foreigner’s apartments have been re-done to look spiffy and up to a decent standard for living but when it came, 13 years ago, to update for Internet use, there was a dilemma.  How to get phone line connections for each apartment when many didn’t use phone lines?  Most just had cellphones.

This was the job of the China’s Telecom workers.  A daunting task to figure out modern communication for so many old buildings in Luzhou but they did it.  I was up and running efficiently when I first arrived and had the city’s ADSL Net installation acquired for my home.

13 years later?  Well, no wonder I’m having trouble!    (Thought I’d post this in a hurry before I was cut off, but I am thankful to have Internet connection at all.) 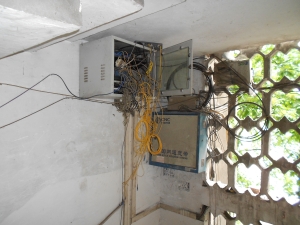 I have been in the Asia region for 30 years as an English language teacher. 28 of those have been spent with the Amity Foundation, a Chinese NGO that works in all areas of development for the Chinese people. Amity teachers are placed at small colleges throughout China as instructors of English language majors in the education field. In other words, my students will one day be English teachers themselves in their small villages or towns once they graduate. Currently, this is my 13th year in Luzhou Vocational and Technical College. The college is located in Luzhou city (loo-joe), Sichuan Province, a metropolis of 5 million people located next to the Yangtze River .
View all posts by connieinchina →
This entry was posted in From Along the Yangtze, Luzhou Vocational and Technical College, Tales from The Yangtze River, Travel. Bookmark the permalink.