Out-of-Town Treks Before the Snow: Theater and a Goodwill Drop-off

Posted on March 7, 2015 by connieinchina 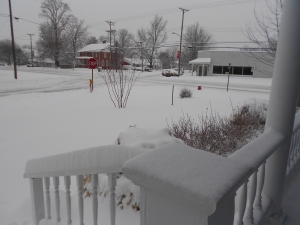 Anyone following America’s Midwest news will know that our weather on this end, at least for the past week, has been something!   Snow, sleet, rain and then flooding due to the melting snow.  Seems we’re having 3 seasons (Fall, Winter, Spring) packed all-in-one into the opening days of March.

My mother and I listened carefully to the weather reports all week, slipping in our out-of-town treks at just the right time.

We managed to take in the Taming of the Shrew at St. Mary-of-the-Woods College, 20 minutes on the outskirts of West Terre Haute, IN.  The production was not well attended with only 35 in the audience of the college’s 1911, 750-seat theater.  Guess everyone else was anticipating a bad weather evening, although the snow didn’t arrive until the next day.

We were also able to take two entire carloads of my dad’s clothes and our own closet clean-outs to the Goodwill in Terre Haute on Thursday.

For those who are not familiar with Goodwill, this is a charity organization where people can drop off used or new things they no longer want or need.  Clothes, electronic equipment, furniture, household appliances, toys and games are just a few items that Goodwill accepts.  These are then gone over by volunteer staff or paid workers who stock the Goodwill store with the things donated.  The contributions are then sold in the adjacent store building for a very cheap price to those who come, usually families at the poverty level or others in need.

There are over 2,900 Goodwill stores in America, with the one nearest us in Terre Haute.

Anyone is welcome to shop at Goodwill, not just the poor. I do know a few people who tromp through stores looking for treasures (antiques, gently used or new items) which they then sell on their own, sometimes on e-Bay or to consignment stores, but to be honest, a majority of patrons who shop at Goodwill are struggling to get by.

The Goodwill website, www.goodwill.org, has even more information about all the services provided but here are the basics:

“Goodwill was founded in 1902 in Boston by Rev. Edgar J. Helms, a Methodist minister and early social innovator. Helms collected used household goods and clothing in wealthier areas of the city, then trained and hired those who were poor to mend and repair the used goods. The goods were then resold or were given to the people who repaired them. The system worked, and the Goodwill philosophy of “a hand up, not a hand out” was born.”

“Dr. Rev. Helms’ vision set an early course for what today has become a $4 billion nonprofit organization. Helms described Goodwill Industries as an “industrial program as well as a social service enterprise…a provider of employment, training and rehabilitation for people of limited employability, and a source of temporary assistance for individuals whose resources were depleted.”

Regarding that last point, when dropping off items, I’ve often noticed that those helping to unload and stack the things from our car into the warehouse are, indeed, people who might not be so employable in other work situations. Some are mentally or physically challenged; others of a lower educational background or obviously struggling in our U.S. economy to make ends meet.  Here, they find respect, good work and an environment in which they can thrive despite their unfortunate situations.

When I think of the Christian-founded Amity Foundation, of which I am a part, I see that same giving spirit of helping the disenfranchised, not in America but in China. So many Amity projects give the Chinese poor or handicapped the ability to rise above their conditions and live a quality, productive and happy life.

As Rev. Helms, Goodwill founder, stated: “We have courage and are unafraid . . . We will press on till the curse of poverty and exploitation is banished from mankind.”

I consider that “we” to incorporate all non-governmental and charity organizations around the world, Amity definitely included.

With just a few more days before my return to China,  here’s wishing you Ping An (Peace) for your day.

I have been in the Asia region for 30 years as an English language teacher. 28 of those have been spent with the Amity Foundation, a Chinese NGO that works in all areas of development for the Chinese people. Amity teachers are placed at small colleges throughout China as instructors of English language majors in the education field. In other words, my students will one day be English teachers themselves in their small villages or towns once they graduate. Currently, this is my 13th year in Luzhou Vocational and Technical College. The college is located in Luzhou city (loo-joe), Sichuan Province, a metropolis of 5 million people located next to the Yangtze River .
View all posts by connieinchina →
This entry was posted in A Visit Home to America, Smalltown American Life, Travel, Visit To The States. Bookmark the permalink.

2 Responses to Out-of-Town Treks Before the Snow: Theater and a Goodwill Drop-off