Honoring My Dad: A Worthy Send-off

Posted on February 17, 2015 by connieinchina

Today is President’s Day, quite an appropriate time to address last week’s send-off for my father, a politically-minded individual and strong advocate of the American right to vote.

As the only Civics teacher in our  high school, who taught a class that was mandatory for graduation, he made sure that every student who was turning 18 was signed up for the next election.  He would bring the County Clerk to the school, have those eligible line up, fill out the forms and register to vote.  Didn’t matter what political party you belonged to, your viewpoints on government or even if you touted you didn’t care: My dad nailed home that the vote was an honor and privilege of our country. Everyone needed to have that privilege, thus the in-school voting registration.

Getting to Know My Dad: A Story Worth Retelling 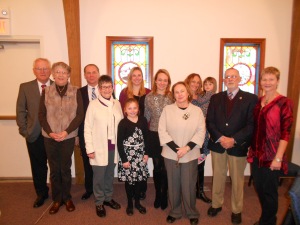 Group photo, immediate and extended family members after the service. Most of us were present for the visitation to hear Mr. Wieck stories.

During the funeral visitation last week, my family greeted 150 neighbors and friends from 4 p.m. to 7 p.m.

At the funeral home, my niece (brother’s daughter, Meredith) and I had put together a display of both photos and then a memorial table for my dad.  (He was cremated.  No body or urn was present.) We included his Marine veteran baseball cap, his stuffed animal Marine bulldog mascot, retired teacher’s apple award and a Democratic donkey from his collection.

Meredith Wieck, my niece who flew in from London for the funeral, and me put together the display for my dad 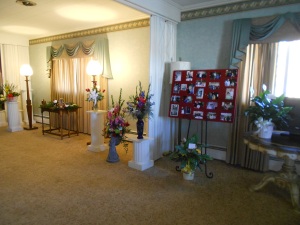 At the funeral home, notice our flowers were minimal, as requested by us. Donations were instead made to many of Bill’s most favored organizations.

Those who came sat to chat or fondly looked over the displays, as Meredith and I had hoped they would, but by far, the most meaningful contact with our visitors came with the stories they told of my dad.

His former students, Veterans of Foreign Wars members (his favorite hang-out in retirement years being the VFW), former colleagues, golf buddies and friends gave me a humorous, unique picture of my dad that I hadn’t known before.

One of my favorite stories was a bet he made with Garnet Evola, one of  the English teachers at Marshall High School.

Every year, Garnet took on the task of being sponsor for the Senior Prom, a dance organized by high school juniors for the graduating senior class.   This was Garnet’s baby, so to speak.  She would spend practically the entire year, working with the junior class student volunteers to pick prom themes, make decorations, order refreshments, prepare  programs, and help with fund-raising ventures.

Garnet’s all-consuming interest in prom became a topic of teasing by the male teachers, which included my father.

When Garnet announced that orchids were being ordered from Hawaii for one particular prom, my father was dubious.

Garnet most assuredly intoned that they would.

“You think so?” my dad continued. “O.K., Garnet.  I tell you what.  If those orchids arrive before the prom, I’ll wear a grass skirt and do the hula.”

“You’ve got a deal!” Garnet replied with a grin.

Thus the bet was on.

During the following months leading up to the prom, both teachers were fairly confident they’d win.

Every day, my dad would corner Garnet in the teachers’ lounge and ask, “So, Garnet, those flowers arrived yet?”

“Not yet, but they’ll be here soon,” Garnet answered with certainty.

Sure enough, right before the senior prom, the orchids were delivered.

And my dad, not to shirk on his betting duties, made sure that his grass-skirt hula was done in full Bill Wieck style.

He researched how to do the Hawaiian male hula, practiced his moves at home with appropriate hand motions, arrived at school for his appointed dance time and gave it his all in a serious, distinguished manner befitting any muscular, big-boned, manly guy.

Cheers and claps from faculty and students followed his dignified performance.

I also was told that he swayed his way toward a triumphant Garnet, standing to the side of the room, where he blew her several kisses of congratulations before making his exit.

The memorial service on Wednesday morning was attended by about 50 along with immediate and extended family members.

During this time, my brother spoke about our father in a remembrance piece, Pastor Richard Lewis of Marshall First UMC presented a message entitled “Thinking Outside the Box” (my dad’s approach to life) and my dad’s younger brother, Chuck, gave very moving, heartfelt words about his big brother whom he loved and looked up to for many years. 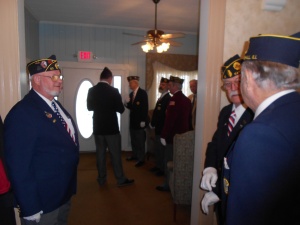 My mom and I were doing fine emotion-wise until it came to the military rites portion of the memorial.  Then the tissues came out.

One by one, the American Legion Post #90 and VFW Post # 5975 honor guard members (some of whom were US Marines) slowly, majestically saluted my dad’s photo as the US Marine Hymn played.

One by one, each of the honor guard saluted my dad.

Later, we were ushered outside where Marshall’s American Legion commander, John Yeley, presented my seated mother with the folded American flag.  As he knelt before her, he gazed directly into her eyes.  With moving intensity, in a clear, strong voice, he thanked my mom for her husband’s service to his country.

Commander Yeley takes the flag to present to my mom.

I watched  this solemn scene unfold with growing admiration for our young Commander Yeley.  You could tell it was a struggle but he never once waivered in keeping his emotions in check.  He carried out this most reverent duty, one U.S. Marine giving tribute to another, with the poise, grace and stateliness it required.

The honor guard immediately followed with a volley of synchronized rifle shots after which taps was played. 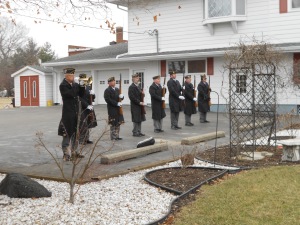 Words can’t describe how deeply proud I was of my dad or how touched I felt for the honor fellow soldiers had given to one of their own.  Such powerful sentiment I have never experienced before, and most likely, never will again.

With Profound Gratitude to All Readers

As I close off this entry for my dad, I’d like to thank those  who sent condolence emails (even clear from China) and others who showered me and my mom with food,  fifty-plus cards, donations to my dad’s favorite organizations (over $600), flowers, and sympathy hugs in the Walmart, church and local Marshall restaurants we’ve been patronizing.

Such loving support and concern for me and my family make being in America at this time all the more meaningful.

From Marshall, Illinois, here’s wishing you Ping An (Peace) for your week as Chinese New Year (Feb. 19) approaches. 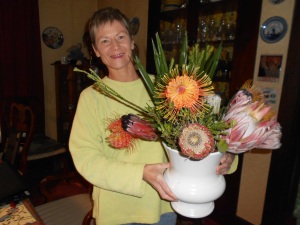 April Lee, a good friend from Hawaii, sent these tropical flowers from Kailua. The flower farm she ordered from is owned and run by a U.S. Marine and his family.

3 Responses to Honoring My Dad: A Worthy Send-off