Part 2: My Memorial Day in Pictures

Yesterday’s Memorial Day service had me driving my parents to the American Legion, where our American Legion Post 90 members hold their annual commemorative  ceremonies for the public.

My father is a Korean War veteran, having served from 1950-51 in the U.S. Marine Corp, so this is one of his yearly highlights:  attending our local Memorial Day service and standing for recognition during the program.

Our Marshall Memorial Day ceremony always includes the selling of paper poppies at the entrance, programs which outline the events that will take place (numerous marches played by the city band, posting and retiring the Colors, Pledge of Allegiance by audience members,  introductions by the Legion commander, a main speaker, symbolic toast to those who have fallen, presentation of Quilts of Valor to area veterans, and  gun salute) and a free dinner afterwards served by American Legion / VFW and the lady Auxiliary members.

I tried my best to photograph as many aspects as I could of this special day.  Hope it gives those who have never experienced this a little taste of our American holiday.

Many of us decorate our yards with flags. This is my parents’ front lawn, as we are getting ready to drive to the American Legion. 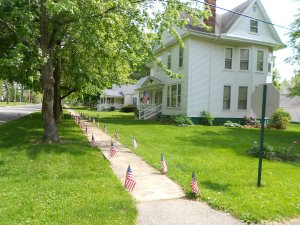 On our drive to the Legion building, we passed many houses, such as ours, with flags out to commemorate the day. 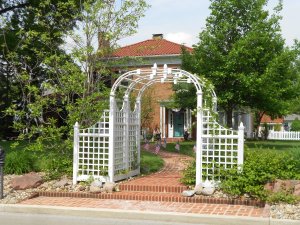 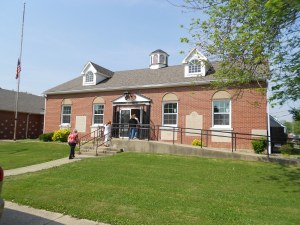 After a few minutes, we arrived at the  American Legion building in my hometown.

Entering the building, we have our greeters, American Legion members getting ready for the ceremony, and the poppy table to pick up your poppies.

I made sure to get programs and also poppies for my parents, already seated. My donation was $5 for the Poppy Program helping our disabled veterans.

In my small town, we always have a good turn-out for Memorial Day.

My father (striped blue shirt) and mother sitting beside him put on their poppies. 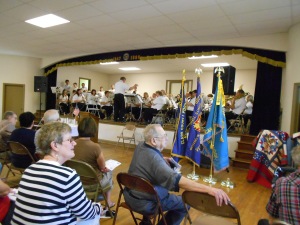 The Marshall City Band plays throughout the service, both festive marches and more solemn numbers. 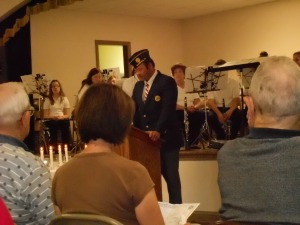 The Color Guard posts the colors (i.e., brings in the US flag and Legion flag)

The audience faces the US flag and says the Pledge of Allegiance, right hand over your heart. 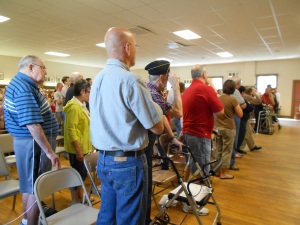 After the speaker, veterans were invited to stand when the band played their military branch anthem. My father stood when the Marine Corp march was played.

Others stood for their recognition serving in the US Army, Airforce and Navy.

The Quilts of Valor, seen here, were made by our local Marshall women and presented to WW 2 veterans for their service to their country.

The first quilt presented to a veteran.

Yet another quilt: “Thank you for your service to our country” followed every presentation.

To close our time together, the color guard retires the Colors (removes the flags) from the auditorium.

Everyone exits outside where we will have the gun salute. 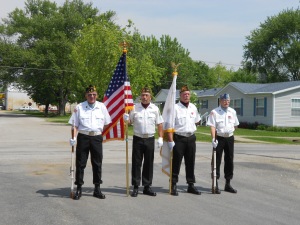 The color guard, getting ready for the gun salute.

3 rounds are fired (line of riflemen in the distance)

Taps (a sleepy, somber melody) is played by a trumpeter and echoed by another trumpeter in honor of the dead.

Those of us present honor the dead, hand over hearts or military salute, until Taps is finished.

The men in the kitchen were busy frying up batches of catfish and chicken for the crowd, along with mashed potatoes.

No one was going home hungry on this day.

That included our young folk as well.

My mom and I were among the well-fed. (My dad went home due to his health issues and we later brought him a take-out container of catfish.)

3 Responses to Part 2: My Memorial Day in Pictures