My walks to and from class take me about 20 minutes once I leave my apartment complex. 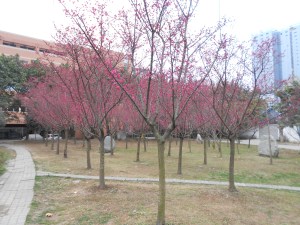 My 20-minute walk through the campus provides some lovely spring scenery.

Last year, I quickly found the best pathways to take across the university campus that would save me a minute or two. These had me weaving my way into the dilapidated parts of the school, where crumbling 1950s staff living quarters, open trash heaps and sewage smells filled the air.

Sadly to say, families and students still live in those parts of the campus, which would certainly be condemned in the US.

It was in October on these treks that I began seeing a boney, ratty-furred black cat, sitting near one of the classroom buildings on a manhole cover to keep warm. It became my habit after that to fix food for him and leave it there. He was quite friendly, actually, and had a lovely purr, unusual for wild, outdoor kitties in China.

When winter came, it was cold outside. I noticed some very kind person had cleverly fixed up within a bush a little cushion and shelter area for Ratty Thing, as I called him, for protection from the chilly wind and rain we were having.

Ratty Thing’s little shelter, with my Chinese note to those who cared that he’s receiving treatment at the veterinarian hospital.

Temperatures dipped into the 30s at night and early morning. I noticed Ratty Thing was often shivering when I’d drop off his food but still grateful for a little attention.

Being an outdoor cat, without vaccinations or proper nutrition, took its toll on Ratty Thing. 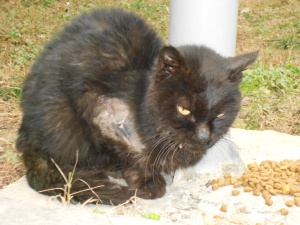 Ratty Thing: cold, hurting and in need of help.

After being missing for a week, he returned with a huge bite on his side, which was already starting to heal.

His mouth was also showing signs of distress.

At first, it wasn’t very noticeable and he’d gobble down his food with ease. But later, foul-smelling, brown drool began dripping from his mouth. His gums were bleeding and so painful he could only stare at his food and make pitiful noises of wanting to eat but not able to do so.

My hesitation to take on such an animal responsibility finally broke down. After watching his decline day after day, I bundled a rather resistant, meowing kitty into my previous dog’s carrier and we went to the vet.

The clinic I took him to is only a 10 minutes walk from where I live. My former dog, Little Flower, had been a patient there in the past. This year in Chengdu, I would stop in from time to time just to say “hi.”

Dr. Zhang is the director and Dr. Mao his partner with a rotating staff of about 12 young people, some with training and others not, but all committed to making little pathetic animals well.

The two vets also have a relationship with a veterinarian school in Canada, I believe. Some of the overseas’ vets in training came for a week to help out and learn new skills plus have supervisors teach updated techniques to the clinic employees.

This kind of cooperation, plus their reputation as being excellent pet caregivers, bring not only Chinese as clients but foreigners as well.

Their facility has better equipment than even my smalltown US vet. Stepping into their operating room, examining areas or even where in-patient animals are caged is like being surrounded by the best of the best on TV’s Animal Planet. They even have incubators for the little puppies who come in, needing immediate attention.

Dr. Zhang was on duty when I entered the clinic, my face registering exasperation.

“It’s not my cat,” I told him in Chinese. “And maybe it has to be euthanized. I don’t know if it has diseases. I just don’t want him to suffer anymore. You decide.”

I was surprised that Ratty Thing actually allowed the doctor to look into his mouth as you could tell he hurt. He gave a huge yowl at one point, with a small lunge to bite but didn’t.

After the initial exam, Dr. Zhang said it was a common illness in outside cats, periodontal disease. All that bacteria entering the mouth from eating rodents, plus bites during animal attacks, lead to such health problems.
After testing for all the dangerous feline diseases, which amazingly Ratty Thing didn’t have, he said it would take about a month of treatment (IVs, antibiotic shots, vitamin enhancers and pills) for his recovery. Even after that, he might have to have a few teeth extracted if the gums weren’t improving.

All that costs money, of course, which I was actually a little short of. My funds are all in America at present, with no means of taking out more until the summer when I return.

We agreed on an amount I could pay and the rest would be on a charity basis. 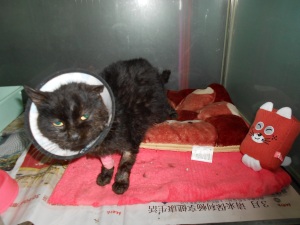 Ratty Thing in his king-like accommodations. Not feeling too well but at least getting the meds he needs. (Notice his kitty toy, presented by the staff.)

After all those freezing nights outside, Ratty Thing was about to discover what the phrase “Living the life of a king” means. He had a clean cushion I provided to sleep on, a warm, comfortable housing unit, tasty food prepared every day (Whiskas store-bought pouches. Yum!) and he had constant attention and cleaning of his cage, including his litter box.

Every day, I stopped by for about 30 minutes in the afternoon to brush him and give him a few pets. The staff even presented him with a silly stuffed animal toy they bought from the clinic’s attached pet supply center. He wasn’t keen on playing with it, of course, but it did brighten his cage for us human visitors.

Getting To Know the Staff

At first, no one would talk to me much due to shyness but after a week, the staff began opening up, trying to use what little English they remembered from their high school days.

I in turn began learning certain illness vocabulary in Chinese which I didn’t know. This came about from me asking what all the other in-patients’ problems were that surrounded Ratty Thing. I learned all sorts of useful phrases, from broken bones and spaying/neutering to cancer and infectious diseases.

Euthanizing was one that always stuck with me. The phrase in Chinese is 安乐死 (an le si), which literally translated means “safe/peaceful, happy death.”

What a lovely way to say “put to sleep.”

Fortunately for Ratty Thing, 安乐死 was not to be his fate.

Yesterday, 15 days later, Ratty Thing was ready to be released.

No more meds or IV drips needed. All his teeth could remain intact. His gums were a lovely pink and his appetite had been exorbitant!

Yes, it was time to leave.

In appreciation for all their help and care, I put together a candy basket for everyone to share. When I arrived yesterday around 1:30, Dr. Zhang and Mao were out to lunch but the rest of the help were there.

Their faces lit up when they saw all the candy varieties I’d thrown into the pile. Everyone began exclaiming “Xie-xie! Xie-xie! (Thank you! Thank you!)” while digging away to find which ones they’d try first.

Of course, pictures were in order to commemorate our success, not to mention a new name for our kitty. 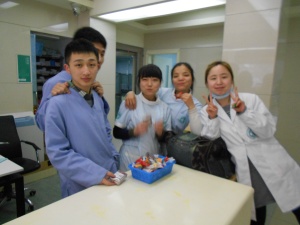 Harmonious Animal Hospital staff, those who were present, enjoy their “thank you” goodies.

While still ratty in his appearance, there is a vast difference between our Tom cat’s look of 3 weeks ago and his look today. A bit cleaner than before, plus all those matted, gnarly, encrusted tufts of hair are gone. I’ve been cutting them off with scissors during my many clinic visits in hopes of making him look a bit more presentable to the outside world.

After all this, a new name was in order.

Being a United Methodist (my Christian denomination), and having paid his vet fees using some Christmas gift money sent from a few faithful United Methodists in America, I decided to call him Wesley.

John Wesley (an Anglican priest in Britain, 1703-1791) is the co-founder of Methodism, a breaking away from the Church of England as a separate denomination. He was a great Christian scholar and organizer who was well-known for his relentless work ethic.

For Wesley, works of mercy (helping others in need) was a necessity to being a good Christian. His most famous quotes include this one:

While our Wesley kitty doesn’t exactly fall into the category of John’s above “people” reference, his plight has definitely brought out the best in us humans.

There are those who carefully constructed his winter outside haven, myself who fed and carried him to the clinic, my US friends who paid for part of his treatment, Dr. Zhang and Mao who graciously covered extra medical costs and the clinic staff who so diligently and unselfishly took care of him all these weeks.

In my estimation, in the light of all our acts of mercy toward our feline in need, the name Wesley fits him perfectly.

There is still a lot of work to be done yet, including finding him a home or at least a proper place to be fostered this summer. Let’s hope his good luck holds and John Wesley’s words continue to work their special magic on his life. 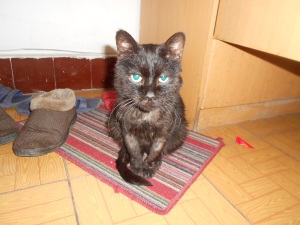 Wesley today, looking for a home.

From Chengdu, China, Wesley and I wish you Ping An (peace) for your day.

I have been in the Asia region for 30 years as an English language teacher. 28 of those have been spent with the Amity Foundation, a Chinese NGO that works in all areas of development for the Chinese people. Amity teachers are placed at small colleges throughout China as instructors of English language majors in the education field. In other words, my students will one day be English teachers themselves in their small villages or towns once they graduate. Currently, this is my 13th year in Luzhou Vocational and Technical College. The college is located in Luzhou city (loo-joe), Sichuan Province, a metropolis of 5 million people located next to the Yangtze River .
View all posts by connieinchina →
This entry was posted in Chengdu Daily Life, Chengdu Life: Pets in China, Tales of China, Travel. Bookmark the permalink.