You’ll remember my past reports of Mr. and Mrs. Old Man River (Zhen and his younger wife, Wu) who recycle discarded materials throughout the campus. With the rapid return of students, and our school garbage cans quickly filling with trash, they’ve been hard at work collecting all week.
And often trotting alongside of them, just like a loyal little canine, has been their trusted companion: a very large, white and yellow cat.
Yes, during my 3-year absence, the Rivers have adopted a feline, which I call Yangtze. 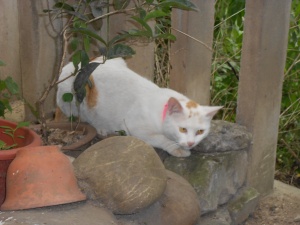 Yangtze is quite the masculine Tom, prowling about the building late at night, often looking for the ladies and yowling for their attention. He enjoys hanging out in the Rivers’ apartment where he is amply fed. He always keeps Mr. River company outside while he sorts, stacks, piles and packages up all the recyclables for the day. He also follows Mrs. River when she goes out to meet her friends, a group of elderly ladies who sit on benches under the shade of trees in front of our nearby dormitories. Here the women enjoy gossiping late into the evening before returning home to prepare dinner. And here is likewise where Yangtze joins in their gathering, lounging at their feet.

In return for their kindness, as any grateful kitty will do, Yangtze often leaves little presents at their front door after his midnight outings.
Coming down the stairwell early morning on my way to the pool, I have been coming across those endearing gifties, dropped off right in front of the Rivers’ apartment door so as not to be missed: dead mice.
They are carefully preserved, without any disfiguring marks and the innards intact. After all, these are meant for his people friends, not for himself. Human consumption of his delicious prizes is utmost on his list thus the need for more thoughtful, less gory kills. 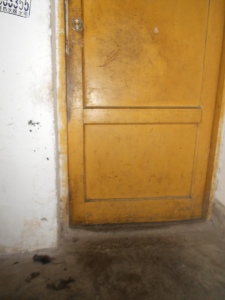 Coming down the stairwell every morning, I spy the Rivers’ front door . . . 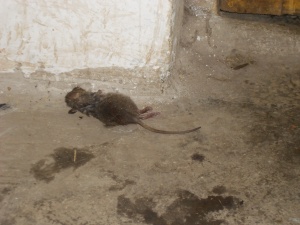 graced with one of Yangtze’s many late-night, fully intact gifties.

The Sentiment Appreciated
I must say, seeing gummed-to-death mice on my way out to the pool every morning is not the pleasantest of sights. I certainly am not going to miss seeing that after leaving for Chengdu tomorrow for my language study venture.
But I am going to miss the sentiment involved.
I know I am certainly grateful to the school for all the kindness they have shown me regarding this new change in my position for the year. Keeping my things for me, allowing me to visit from time to time to check up on my apartment, and being willing to invite me to teach again next year are not extended to every foreigner. I am fully aware of that and have taken every opportunity to thank all the leaders and the college staff who have been involved in such generosity. Tea, American chocolates, copied photographs and small hometown items were my presents of appreciation given this past week.
I guess you could say that Yangtze and I are on the same page when it comes to saying thank you to people who have taken such good care of us.
I just made sure not to do it with dead mice.

From along China’s infamous Yangtze, before I leave for Chengdu living tomorrow, here’s wishing you Ping An (peace) for your day.

NOTE: As some might know, my website is blocked in China. While people in China can read my entries, the photographs are blackened out and I am not able to post using Chinese Internet access. I have a re-router which allows me full access to do all that I need to on the Net but that is connected to the city’s system. While in Chengdu, I will need to change servers so it might take awhile to get things up and running. Hopefully, I can keep you all updated after that is accomplished. Just give me a little time.