Posted on February 10, 2013 by connieinchina

China being 13 hours ahead of us here in Illinois, it’s an early Saturday night in Asia with families beginning celebrations for Spring Festival Eve festivities.  Houses have been cleaned all day to welcome in the new year and groceries crowded with people picking up the best produce to prepare for the evening meal.  Duck, chicken, fish, sausage, pork, and shrimp will be at the top of everyone’s list, along with numerous vegetables, so the lines will be long. All will anxiously be awaiting the evenings TV gala specials filled with their favorite stars singing and performing skits.  They’ll be astounded by amazing dance routines (both traditional and modern) and mesmerized by emcees’ glittering costumes and clever banter.  In Sichuan, mahjong tables will be set up in living rooms to enjoy all night gaming and children will be released into the late night courtyards and streets to play with friends.

But  these Spring Festival usherings also bring with them a certain amount of weixian (way-shee-uhn), danger that fill newspapers all over the country for days after

In the States, holidays bring with them a frightening number of car accidents that result in both injuries and deaths. Thanksgiving  brings the worst fatality statistics.  According to a Forbes’ 2012 article, 91% of all Americans usually travel by car during the Thanksgiving Day weekend, with 502  deaths reported  last year on the day itself.  That outranks January 1st, where all-night partying and drunk driving result in nearly half of the traffic deaths.

While private car ownership in China has risen considerably over the years, Chinese New Year keeps people at home with families, not traveling.  What danger can arise in that?

Banging, Whizzing, Whirring in the Chinese New Year with Fireworks

The custom has always been setting off firecrackers for Spring Festival Eve and the days following to frighten away bad luck ghosts and demons.  The Chinese firecrackers are far more dangerous than what we use here in the States. Firecrackers used for Chinese New Year are rarely in single form but in 5 to 20 feet strands.  They are hung from rooftops and dangle downward to the ground, where they are lit and explode in continuous banging sessions that last anywhere from 2 to 10 minutes.  They are sold in round cardboard boxes with the strands coiled around and around one another.

Years ago, relatives returning home from the big cities would buy these and carry them home for countryside celebrations.  Despite travel laws forbidding dangerous materials on trains or buses, people would still manage smuggle them through.  This resulted in accidental explosions, destroying entire train cars or buses.  Naturally, fatalities were quite high.

But in recent years, there have been stricter regulations concerning these dangerous New Year items.  Postings are everywhere before boarding public vehicles, stating flammable materials and weapons are not allowed as carry-ons.  An X-ray machine is at the entrance to every bus and train station where passengers are required to put their luggage, bags and sacks on the conveyer belt for checking. Confiscations result if someone is hauling what they’re not supposed to.   This has helped to clamp down on firework explosions but not so for individual use once people have them.

There are still many news stories that tell the tragic tale of small children being killed or maimed due to lighting fireworks during the Chinese New Year.    Since the holiday usually has adults inside visiting with relatives they haven’t seen all year, this leaves kids running wild outside, unsupervised and excited to try out the newest big bang device available.  Before, single firecrackers were the “in” thing but now, fancier fireworks are available for kids.  Small fireworks that zing, zoom, zip, whir, fizzle and whiz their way into the “Bang!” of celebrations are everywhere.   With their hong bao (red envelope) money in hand, children eagerly buy these products from roadside sellers for a US quarter on up to several dollars.  It’s not unusual to hear news reports about eyes and fingers being lost or horrific burnings happening when clothes catch on fire due to children playing with fireworks.

Even more frightening have been explosions taking place in firework factories or from trucks transporting their fireworks to villages for celebrations.  February 1st had just such an accident take place in central China, where a truck laden with fireworks exploded on a bridge in Henan Province, sending 10 to 20 vehicles plunging below.  9 people were reported killed, although that number has been questioned as being too low.

Whatever the number, these kind of news stories are extremely prevalent at this time of year in China.

The Dog and I Embracing our Own Fu

It’s been quite a long time since I was in China for Spring Festival.  While I do miss the public’s excited holiday fu  at this time of year, I certainly don’t miss the “weixian” (danger) of fireworks attacking me from all directions once I’m out.

So for my Chinese New Year’s Eve, it’ll be a pleasant stroll with Lao-lao (Old-old), our Chinese immigrant Chihuahua, along the quiet, calm streets of Marshall in this lovely sunshine we’re having.  That’s about as much fu as the dog and I want for the Year of the Snake. 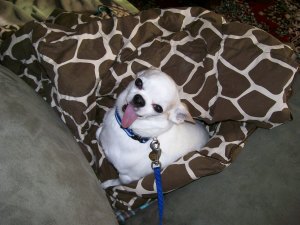 Little Lao-lao is ready for his New Year’s Eve walk about town. 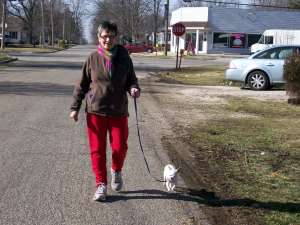 Mamma 2 (my mother) starts us off. 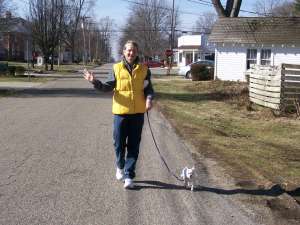 Mamma 1 (me) and Lao-lao on our New Year’s Eve walk about town.

Here’s hoping you’ll embrace your own fu  for the day. Ping An (Peace) and Happy Year of the Snake! 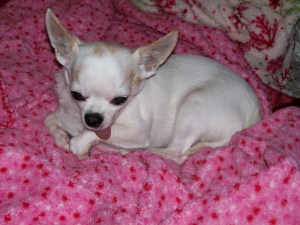 I have been in the Asia region for 30 years as an English language teacher. 28 of those have been spent with the Amity Foundation, a Chinese NGO that works in all areas of development for the Chinese people. Amity teachers are placed at small colleges throughout China as instructors of English language majors in the education field. In other words, my students will one day be English teachers themselves in their small villages or towns once they graduate. Currently, this is my 13th year in Luzhou Vocational and Technical College. The college is located in Luzhou city (loo-joe), Sichuan Province, a metropolis of 5 million people located next to the Yangtze River .
View all posts by connieinchina →
This entry was posted in A Visit Home to America, The Chinese New Year, Travel. Bookmark the permalink.