Posted on November 24, 2012 by connieinchina

I’ve said it before, and I’ll most likely say it again: I’m the beaming lighthouse for strays and little lost critters, which is always a problem in China as there are so many.

Within a few weeks after finding Cute-cute a good home, a tiny 2-month old puppy landed in my lap. She was hungrily devouring a discarded cooked sweet potato and was shivering uncontrollably with the 50-degree weather we were having.

Oh, dear!  Yet another case of a pathetic animal needing someone to find them a good home.

Abandoned, tossed-out strays are now becoming a big problem in Luzhou as well as Chengdu and many other cities across China.

In Guangxi, I rarely saw an animal wandering the streets, mostly because people ate them.  In southern China, a lost dog with no owner quickly found itself into someone’s cooking pot, not happily eating out of one.  As for this area of the country,  3 years ago pet ownership was still something not many ventured into.  If they did, it was for breeding purposes or to show their upper-class status in the community.

Now ordinary folk seem to have moved in the direction of desiring a pet because they see famous people on TV have them or their neighbors trot around the block with them.  The dogs look cute and pretty.  Everyone admires their fluffy coats and darling gaits.  They greet everyone with such happiness and look adoringly at their owners with total commitment.

Such a devoted relationship passionately enters into every human heart, whether Chinese or not.  But in China, responsible pet ownership is not something every person considers or knows about.

Educating the masses on how to care for animals is still in its beginning stages.  A few pet magazines and websites inform new owners about vaccinations, training, breeding, medical care and food requirements but a majority of people don’t think about such things.

They see a well-behaved dog, think it comes naturally with that ability and off they go to their local puppy markets. 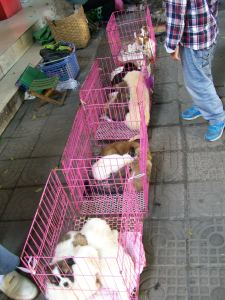 Our Luzhou sidewalk pet market, with sellers in from the countryside to get what they can for puppies and kittens.

In Chengdu, there are many of these outdoor gathering places, located outside city centers or in back alleyways. People from the countryside or looking to make a quick buck bring their cages of animals (lost, stolen or specifically bred) to sell to the public.  These pet markets are not very reputable, with many of the animals being sick already.  Lucky individuals will find a semi-healthy one which might recover after some care.  If not, the Chinese don’t mind much.  If you spend $5-10 on a pet, dumping it rather than seeing to its medical needs at the vet’s is a quick, cheap option.

Training issues always come into play.  Most young pets are hit, poked, yelled at or roughly dragged about in order to be controlled.  This is similar training that goes on with naughty little children so most of these methods tend to be carried over to pet ownership.  The results are not good. Usually, this creates a very mean, snarling animal or one that is so timid it hides whenever it sees someone approach.

And if the animal gets too big, or is too much trouble to manage, out it goes into the street.  Thus the hundreds of strays, scrounging for food and  trotting the streets of so many Chinese cities across the country.

Not a Fate For Sweet Potato 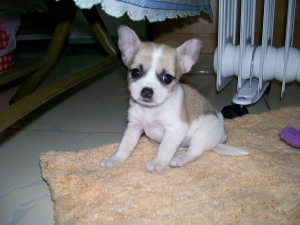 Sweet Potato Puppy finds a warm place by the heater.

But that was not to be the fate of Sweet Potato puppy, if I could help it.  She immediately was given a place by my heater, on one of Little Flower’s blankets, and a nice helping of dry food.

She gobbled that down immediately and settled herself on her comfy bedding, where she slipped into happy dreams of safe, warm places.

Fast asleep, Sweet Potato Puppy on Little Flower’s blanket with one of her squeaky toys.

As all veterinarians advise: If your animal is sick, get it to the nearest animal doctor immediately.  This is especially true for little puppies.

Within 7 hours of being in my home, my puppy guest was sniffling and coughing.

Kennel cough, or puppy influenza, is a common illness among young dogs.  A few days of antibiotics usually take care of this problem.  Little Flower had this same illness when I first got her and we spent 10 days getting rid of it. She recovered very nicely.

As for Sweet Potato, I had her at Dr. Mao’s clinic the next morning at 8 a.m. sharp after calling him about a lost animal in need of help. He first tested her for the parvo virus and distemper, both deadly diseases for any dog.

Next, both Dr. Mao and Dr. Qiu, my vet in Chengdu, consulted on the telephone about treatment.

They both agreed 4-5 days of antibiotic injections should take care of it.  Sweet Potato had her shots and then a breathing treatment to help with the coughing.  I took her home after an hour and already, she was feeling much better.  She was exploring, eating, and burrowing into her blanket.  She also made a HUGE fuss during the night when it was lights-out.  Obviously, her strength was back enough for her to say, “I don’t like being left alone!”

Day 2 of treatment had her at the vet’s all day because I had too many classes to go to and from the clinic multiple times.  When she returned that afternoon, she was not quite as perky as the day before.  Nor did she eat as well.  Plus her hacking cough  came back later that evening.

Day 3 had Dr. Mao concerned enough that he suggested she stay in the clinic. It was unheated, as are most places in this part of China, and I worried about our night temperatures which dipped into the high 40s.  But she was given an electric heating pad under her that gave out suitable warmth. This would help. And Dr. Mao would be feeding her tubed nutrients 4 – 5 times a day as a supplement to her appetite, which was now nil.

Day 4 was not looking good. When I arrived, she was covered up in her blanket, looking miserable and whining pathetically.

“She isn’t eating,” Dr. Mao said with a frown. “She really must eat. The antibiotics take time to work.  In a big dog, it’s not so serious because they can survive a few days without food until they get better.  But in a very young dog . . .”

He didn’t finish his sentence.

Despite all our efforts, Sweet Potato was not getting better.

We had hoped that Sweet Potato might be able to fight off whatever infection she had but it wasn’t so. She died the next morning.

Dr. Mao had spent a lot of time, energy and money on our little girl but he refused to charge me. He said if the dog had survived, I could pay but the result of death was not something I should give him money for.

I honestly felt that wasn’t right but this was Dr. Mao’s way of saying thank you to me for finding Cute-cute a good home.   I pushed as best as I could but he won out in the end.

In gratitude, the next day I put together an American gift basket of “men” goodies for him and his colleagues.  These were things I had brought with me from the States for special occasions to thank the Chinese at appropriate times.

This was certainly one of those appropriate times.

Kitty Sitting For the Weekend

Sweet Potato’s fate as a lost animal didn’t have a happy ending but there is a another, more positive tale to report.

One of my friends (a couple, actually) found an abandoned kitten in their stairwell.  She was 4 weeks old, shivering and covered in fleas.  A neighbor above had thrown the little thing out on the first floor because they didn’t want to deal with it.  Perhaps it was purchased from one of the pet markets, or found outside and taken pity upon by the person until it became a nuisance.

Whatever Kitty’s story was, my friend and her husband took her in.

Now Kitty is a fat little happy thing, spoiled rotten and has the run of her little apartment dwelling.

And for this weekend, looks like Auntie Connie will be kitty sitting while my friends head out of town for a weekend trip.  It’s always fun to enjoy the company of a little animal for a few days.  No turkey leftovers for either of us thus we’ve made due with cooked chicken breasts. Kitty has been getting her fair share of bird nibbles.  She is in Kitty heaven!

At Auntie Connie’s house, spoiling is a must. 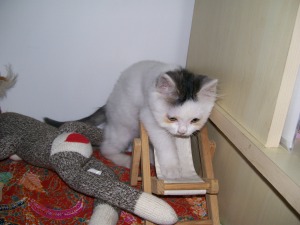 Kitty exploring a new environment: This looks like fun! 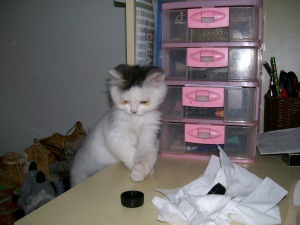 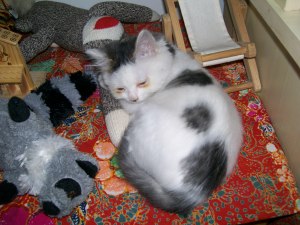 Kitty takes her Saturday afternoon nap after a full morning of adventures.

From along the Yangtze, here’s sending Ping An (Peace) your way for your holiday weekend.