Getting into the Groove of Our College’s English Corner

What Is English Corner, or EC?

For those who aren’t familiar with English Corners (ECs) in China, these are gathering places where people come together regularly to practice their English.  Set times and days are the usual format, with meetings taking place in city parks or universities and colleges.

The best English Corners are those where a variety of people attend.  At Sichuan University in Chengdu, English Corner takes place at the school’s flagpole, next to the sports’ stadium, on Friday evenings from 7 p.m. to whenever people depart.  I’ve attended several of these over the past 8 years and am always amazed at the language ability of those present.   They are quite adequate in their skills, much more so than my poor countryside students whose educational standards fall far below those in the city.

English Corners can be found everywhere in China.  It’s just a matter of asking around to discover them in the area you’re living in or visiting.

English Corner at Luzhou Vocational and Technical College:  A Struggle

In all English Corners I’ve participated in, the Chinese are eager to speak.  They always take the initiative.  Topics are never set. Everyone just says what comes to mind, in as little or as much English as he or she is capable of.

But at our 3-year vocational college, English Corner presents somewhat of a challenge.

My students, especially my freshmen, have no experience of expressing their opinions in English, or even asking questions or giving responses, unless a teacher is there to guide them.  Memorizing dialogues, phrases and sentences, or studying grammar rules are the ways they’ve been taught to learn a language.  Getting them to talk about anything, even with topics presented, leaves them at a loss what to say after they’ve finished the first few sentences.

They sit in silence, in their little groups of 5 or 6, and stare at the floor.

Take for example our first English Corner we had 3 weeks ago.  What a fiasco!

A Lesson in Patience

Ashley, John and I had no idea how many would show up for our first Thursday EC on campus, held from 7 – 8 p.m.,  but we anticipated a hefty crowd.  The entire campus knew about this night due to announcement boards around the school placed there by the English Association members.  Naturally, all the English majors (some 500 of them) would be eager to see what was going on the first night we were to have this.
Usually, English Corners are held outside with students coming and going,  branching off into their own little groups or joining with friends they already know. The foreigners then rotate from group to group to join conversations with everyone.

Yet our students are not as savvy in the ways of how English Corners work.  They crave guidelines and leadership.  Thus we scheduled our first EC in the classroom, a more familiar, comfortable setting for our students and a place where we could better organize them.

Students were pressed into a single room, over 100 of them, standing or sitting with numerous desks crammed together.

We foreigners quickly improvised and hustled half of the young folk out of one room and into another.  I took one classroom while Ashley and John took another.  Even then, the students were overflowing outside both rooms.  Many were peering in the sliding glass windows, unable to enter due to the large number of students already there.

In my classroom, I led a warm-up game where volunteer teams came to the board and made sentences using given words.  It took awhile for them to get going but by the end of 15 minutes, they seemed ready to plunge into our discussion activities. 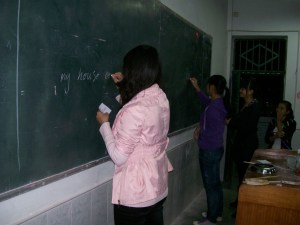 Our warm-up game helped get everyone ready for speaking.

Or so I thought.

I placed our 3 topics on the board:   My Family, An Exciting Day and An Important Life Lesson I Learned.  These were essay themes I had assigned to all of my students 3 weeks earlier.

I thought I was so clever.

Since  they’d already written about these things, surely they’d have something to say about them in oral English as well.

After the topics were announced, I tried to gather them into groups so they could begin sharing.

Everyone stayed glued to their seats. They looked at me blankly, some in utter bewilderment as to what they were being asked to do.  And they were not at all pleased that I was requesting them to move.

After a great deal of cajoling and forcefully prying several out of their chairs, I managed to get my crowd of about 80 into groups of  5 to 8 to stand around the room.

“The topics are on the board,” I told them. “It’s your turn now.  Have fun sharing!”

Total silence.
They gazed at me while I whisked around the room, trying to get them started.

“What are we doing?” someone whispered in Chinese to her classmate.  “I don’t understand.”

“We’re to talk about the topics,” her friend answered. “On the board.”

The girl squinted to see the words written, quietly mouthed the topics aloud and then replied, “What do I say?”

“Say what you want,” I cheerfully interjected in English while hovering at her side. “Tell us about your family.  Or an exciting day.  I’m sure you can say something.  Just practice your English!”

I could feel my once relaxed, pleasant smile take on a strained, frustrated edge as my patience began to wane.

Finding An “Out” to Practicing English

After I spent 20 minutes racing around, urging groups to talk but having minimal success, my EC crowd found a new way to entertain themselves:  Taking pictures.

Ah, Chinese and their cameras!  Once it starts, there’s no stopping it.

It only took one lone student to secretly pull out her cell phone, click to her photograph option and begin snapping pictures of me bustling about the room before the everyone was doing it.

I was so caught off-guard that I permitted myself to be grabbed, pulled, tugged and dragged in all directions for hundreds of poses.  It became the opportunity of a lifetime:  All those enthusiastic freshmen eager to show parents and friends their foreign teacher, Connie, standing by their side.

“Look!” they’d exclaim while checking out their cell phone shots. “Here we are together.  Teacher, you look very beautiful!”

I kindly reviewed with them dozens of those photos, taken with different students from different angles in different positions amid different backgrounds.

The only thing that remained the same was my frozen, teeth-gritting grin and deer-in-the-headlights’ expression.

From their viewpoint, I appeared the happy foreigner, gladly enjoying photo ops with her beloved students.

From my end, my exasperation level was so high I was getting a splitting headache. 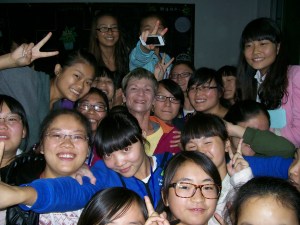 Not a very complimentary photo of me but the students loved it.

When 8 p.m. finally came upon us, our energetic EC participants left amid laughter and friendly chatter, all the while sharing with one another their pictures from the evening.

Ashley and John appeared at my classroom doorway, looking just as harried and exhausted as I did.

We all agreed:  We obviously needed better planning for next time around.

Plans Made For Better Results

The next week, we were better equipped to handle the students. We  branched off into 3 different classrooms to lead the large numbers attending, called it quits for photos until after 8 p.m. and rotated every 15 minutes with different topic questions in hand for students to answer.

This gave us more control but it was still a struggle to get students to talk for the allotted time period.

Our next venture is to enlist the help of the English Association members.  We plan to have 5 English major volunteers assigned to each one of us who can help get the conversations started.  They’ll be in charge of dividing students into groups, leading discussions and pulling students out of their shy language state.  That will give us the opportunity monitor the room as well as join in ourselves.

Brilliant idea, but still in the initial stages of set-up.

Our EC This Evening:   Third Time’s a Charm

This evening, our topics center around countries you’d like to visit and favorite Chinese cities.   The novelty of EC has already started to wear off.  A few hours ago, I entered a classroom with a much smaller crowd that before. Quite manageable and those participating were the truly spirited ones who wanted to improve their language skills, not just tag along because their friends were there. 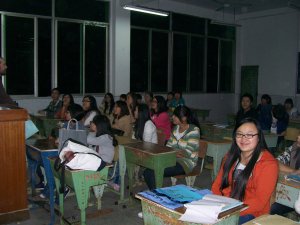 Standing room only was not a problem this evening. 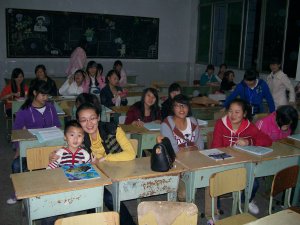 We even had a xiao pengyou (little friend) in our midst. Junior high teacher, “Jessica”, brought her little boy along for our EC evening together.

I was also happy to see that in every group, one student took the initiative to read the questions I had prepared on hand-outs and make sure everyone had something to say. 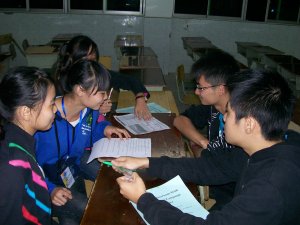 Out of the 300 English majors I teach, only 15 are boys. Here are two of my freshmen, getting in that extra English practice for our EC night. 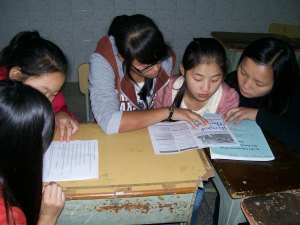 Yet another group ready to discuss their opinions.

So it looks like, albeit slowly, we are beginning to get our core group of attendees who are truly going to work hard to say something, not just sit in silence for an entire hour.

That definitely is progress!  And on that last note, I’ll close off with Ping An (Peace) for your weekend with more updates soon to come.