The last report had me debating the weather:  Stay in my apartment without any air-conditioning in 94-degree indoor temps  or return to Nanning for a weekend of comfort.

What can I say?  I never was one for suffering.

Yes, I succumbed to temptation and was on that 1 p.m. bus heading to Nanning this past Friday.  And who should also be planning a Nanning weekend but Godfrey, one of my 2nd year students.

Godfrey was celebrating his 21st birthday and wanted something special to do rather than hang out in the heat of Longzhou.   His father had given him a generous hong bao (red envelope gift money) of 700 yuan ($110).

The custom in China on many occasions is to treat your friends to dinner on your birthday, not for them to treat you or give you gifts.    Godfrey’s dorm mates have never really been that friendly to him so his idea was to go where people liked him.  He was meeting up with classmates from his hometown who were now studying in Nanning at one of the colleges there.  His plan was to stay with them at the college and enjoy his celebrations with old friends.

Godfrey’s Saturday Night Treat to Himself

It was decided that Godfrey and I would meet up on Saturday evening at my hotel, the Jiang Nan Binguan (River South Hotel). 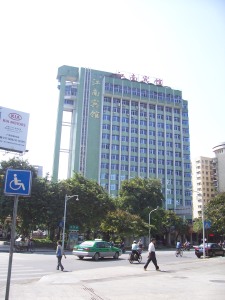 My room had air-conditioning and was very pleasant to hang out in.  His friend’s dormitory, on the other hand, had 8 guys to a room and was stifling.  I think Godfrey was sharing the bed with his roommate, which is something quite common to do in China.    With only one ceiling fan, I’m sure it was unbearably hot in that small, crowded room, especially with an extra person thrown into the mix.

When Godfrey arrived at my place at 7 p.m., he had brought with him his travel things.  It seems his friend’s roommates weren’t too happy about him being there and didn’t want him around a second night.  With his birthday money, he decided to treat himself to a hotel room somewhere in my area.  My hotel is quite reasonable at 100 yuan ($16) a night but Godfrey wanted something cheaper.  We marched the alleyways to the small 30 – 60 yuan family-run dormitories ($5 – $10) but Godfrey turned up his nose at every one of them.  Too dirty and not to his liking.

So for a splurge, Godfrey decided to use his birthday money to get a room at my hotel, which I felt was a wise decision.

It’s hard to believe for Americans, but a majority of my Chinese students  and their families have never stayed in a hotel before.  They save money by crashing with friends or get a single room at cheap, commoners’ dormitories for overnight stays on travels home.

One would think there need be no instruction to another person for staying in a hotel, but Godfrey was a bit clueless so it was up to me to lead the way.

First, he didn’t know how to use the key card.  We place these next to the card reader on the door and it buzzes us in.  After showing him that, and having him try by himself a few times, we entered his room.

Next was using the card to turn on the electricity.  Almost all Chinese hotel rooms require you to put the card into a holder on the wall.  This will turn on the electricity in the room.  When you leave the room, you take the card with you, meaning the electricity goes off.  This is a great way to conserve on energy once someone has left.  No need to remember to turn lights off as the card key, once removed from the holder, will see to that automatically.  In fact, most Asian hotels have the same sort of mechanisms built into their room system.

I’ve been to only 1 American hotel that had the same set-up.  For the most part,U.S.hotels like to keep their patrons happy with a 24-hour electricity usage whether you’re in the room or not.  It is just another way Americans find to waste energy and money, which has always been a complaint by other European and Asian nations.  But moving on . . .

After entering the room, there was the flat-screen TV to deal with. My hotel used to have the clunky, bulky T.V. sets but have now switched to the more updated versions.  They are a bit tricky to use as you need to push buttons on the screen for turning it off and on before moving to the remote.  We practiced that a bit as well before it was time to move on to the snack display.

“Look at the things for me to eat!” Godfrey piped up when he saw the peanuts, soda, cigarettes, chips and other items left in a basket on the table.  He began pawing through the goodies with eagerness.

“Yes, there’s a lot here but if you want to eat them, you have to pay for them,” I explained.
I showed Godfrey the menu card in the basket which gave the prices for the items.  Naturally, they were outrageously expensive.   I told Godfrey it was best to leave those things alone and not bother with them.

He definitely agreed with me on that one.

We moved on to the bathroom, which had towels provided, a water glass and the usual complimentary toothbrush and toothpaste, soap, shampoo, shower cap and comb.  The Chinese cheap $5-10 dormitories sometimes provide complimentary toiletries but not usually towels or water glasses.   Those you need to bring yourself.

“Can I use the towels and the glass, no money?” Godfrey asked, thinking of the snack display that almost cost him a few extra dollars if he’d have eaten what was being offered. 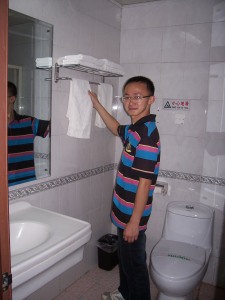 “So can I also take them home?”
Whoops!  An explanation of “what’s good to use, not to take” ensued.  That included the porcelain tea mugs on the coffee table.

“And these things here?” he continued for the complimentary toiletries.

“Yes, those you can both use and take,” I assured him.

Godfrey looked very confused.  Who would have thought staying in a hotel room would be this complicated?

We next had a discussion about the telephone.

“Look!  There’s a telephone!  I can call my friends and my parents!”

Godfrey picked up the receiver and started to dial.

“I’m afraid that won’t work,” I said.  “We have to open the line for outside calls downstairs.  Everything outside of he hotel, you have to pay for.”

“I don’t think so.  There’s a telephone here.  I can call.  My other friends said they called in a hotel once.”

A foreigner can never argue with a Chinese person as we are never believed so I told him to call down to the front desk and ask.

Sure enough, no outside calls.  Godfrey received that message, hung up the phone and announced to me with authority, “You can’t call outside of the hotel.  If you do, you have to pay.  It’s too expensive!”
Hmmm.  Didn’t someone say that before?

After settling into his room, Godfrey and I watched his TV and enjoyed the air-conditioning.  While marching the alleyways, we had picked up some fruit drinks so we were sipping those down as well. 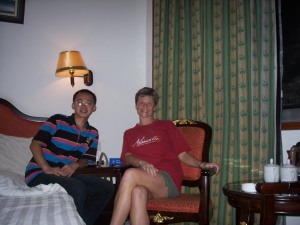 Godfrey and I, enjoying the comforts of our 2-star hotel.

Godfrey had an early morning start so at 10 p.m.,  I left him to enjoy his first hotel room, a big birthday gift to himself.

Before he left the next day, he did say he had called his dad the night before on his cellphone to say “hi.” I guess his dad chewed on him a bit for not returning to his friend’s roasting dormitory room for free.  I guess he thought that was a huge waste of money, his son booking a hotel room, even if it was for his birthday.

Despite his parents’ disapproval, Godfrey didn’t seem to regret his special birthday treat to himself.  After all, you only turn 21 once.  Might as well spend it in style!

Happy 21st, Godfrey! Hope it was a happy one spent in the luxury of your first hotel experience.

From China, here’s wishing you Ping An (Peace) for your week.