Once Again, Tomb Sweeping Festival is Upon Us

Posted on April 9, 2012 by connieinchina

In America, our store aisles are already overstocked with Easter items. Jelly beans, chocolate eggs, bunnies, and lilies are being sold by the millions all across the country.

But in China, a different kind of holiday celebration is overtaking us.

April 5 brings us Qing Ming Jie, literally translated as Clear-Bright Festival but more commonly known as Tomb Sweeping Festival.  This is one of China’s newer official holidays, having been declared as such only 3 years ago.

Last year, I reported on this day in a previous blog. While we are supposed to have a 1-day only holiday, we really have a block of 3 days off. That’s after we had Saturday and Sunday make-up working days. These make-up days took place all across China to give people 3 days of traveling to gravesites. Why we aren’t just given 3 days off to begin with is beyond me but that’s the way it goes.

My students have too far to go to return to their hometowns so they are stuck on campus with nothing to do except sleep, shop and play sports outdoors in our gorgeous weather.

Although I included Qing Ming Jie in last year’s updates, I’ll just refresh your memory a bit with some very fascinating added information.

This Qing Dynasty, 300-year-old tradition focuses on remembrance of those who’ve passed before us.  It was set aside for families to honor their ancestors, visiting gravesites to clean the area of weeds, light special incense called joss sticks (“joss” means a Chinese image or house idol in a shrine) and burn paper money for their loved ones to spend in heaven.  Those with no gravesites to attend to, such as city residents, gather together and create small altars either outside their doorsteps or inside their homes. They then follow the usual customs celebrated in their hometown areas.

The Traditional Customs for Countryside Gravesites

Cremation was first strongly promoted by the Chinese government in 1956 as a means of cutting down on burial practices deemed undesireable and unsanitary by the new Communist China. But the choice of a body burial in the countryside is still the most used option in China today.

According to China’s director of the division of funeral and interment management, 2011 brought 4.3 million cremations, which was 48 % of all registered deaths. 52 % still followed the traditional burial practices with the person being laid to rest in countryside areas.

My good friend, Zhang Ou (Rebecca), shared with me her family’s annual pilgrimage to the countryside for Qing Ming Jie and what that entailed.

I thought it was interesting enough to warrant a blog entry, so here goes!

How Do Chinese Acquire A Burial Plot?

Rebecca first explained how Chinese manage getting a countryside burial plot for relatives. In her case, the site was acquired for her grandparents.

Her grandfather was a countryside doctor. He spent his life serving in a rural area so it was only befitting that he and his wife both be buried with the people they so loved.

After his death, Rebecca’s father went to the local villagers to ask permission for his father and his mother to be buried in their area. Land in China belongs to the government with farmers being allotted plots to grow vegetables or fruit. To bury someone who is from outside of the farming community, permission is needed from those who work the land.

After choosing a burial spot, Rebecca’s father went to the appropriate farmer to ask his permission. Due to the great respect held for his father, permission was given.

In appreciation, Rebecca’s father followed the Chinese custom of thanking the farmer and his neighbors for this honor. He hired a countryside catering family who prepared 3 days of meals to be served outside in the village community center. Such local catering services are common in China for weddings, funerals and special celebrations. A price is agreed upon and the caterers bring portable gas tanks and stovetops for cooking, woks, utensils, tables, chairs, tents and a massive supply of food for the big occasion. Cooking for crowds is their specialty and they do an impressive job.

Lunch and dinner, a total of 6 meals, were offered to the villagers. Rebecca’s parents stayed among the diners for 3 days to chat and show their appreciation for the kindness offered to their deceased family member.

For Rebecca’s family, the annual visit to her grandparents’ gravesite is a full day affair.

First, they must take the long-distance bus 2 hours to the countryside area. They bring with them snacks for the road, joss sticks and candles for the gravesite, fake paper money to burn for her grandparents to spend in heaven and a string of firecrackers.

After arriving at the destination, they walk 40 minutes through winding trails up into the hillsides where the gravesite is located.

When they arrive, they clean the area of weeds, leaves and sticks. Candles and joss sticks are placed directly into the ground and lit. Next, they let off firecrackers. This is to get the spirits’ attention that they have come, signaling for their deceased relatives to listen.

Together, the family bows three times. Then each person speaks in a low voice, telling the visiting spirits about their lives for the year. This is also accompanied by requests to bring them good luck in their ventures, such as finding a good job, passing important tests, making more money or watching over their well-being.

When the last person has spoken, it’s time to return.

For local villagers who live near the gravesite, other Tomb Sweeping practices might be followed. One of my students told me in his village, everyone had to kill a chicken and prepare noodles to offer to those who had died.  At the grave, a small table altar was prepared, on which was placed the lifeless, plucked chicken and pile of noodles in a huge bowl. The usual bows were made, candles lit, firecrackers set off and communal sharing of the year. After that, the family took away the offerings to cook for the family dinner.

In the past, the traditional items for this special day were all that was offered. But within recent years, commercialism has taken hold.

The most popular belief for honoring ancestors is that by burning images of things, the dead can enjoy these in heaven. Fake money has always been the traditional gift to send to heaven but now there’s a lot more to choose from.

Paper-made houses, cars, watches, cell phones and clothes are to be had as well. These are ready to be ignited at the grave and whisked off into the hands of the deceased.

In my small market, the sellers are out in abundance with their Tomb Sweeping wares. Many of the paper items come with assembly required. It’s quite common to see the booth owners quickly putting these together with tape or cutting out doll-sized paper clothes for consumers to purchase.

It’s fascinating to see how a simple tradition has erupted into a full-blown spending spree by, and for, the living.

In my little Chinese town, we have no such posh offerings by our sellers.  People here from the countryside mostly stick with basic needs of the average person, and that’s what’s currently filling our market tents in tiny Longzhou.

A Question of Tradition, Not Belief

Do people actually believe such things?  That by burning money or items, their ancestors and recently departed can enjoy them in the hereafter?

Perhaps hundreds of years ago, the answer was “yes” but in today’s modern society, not really.

“It’s just something we do,” my students and colleagues have told me.  “A tradition.  A way of remembering our family members who are no longer with us.”

Yet you have to admit, the idea itself is quite intriguing.  Who among us wouldn’t delight in the image of great Aunt Ruth or Grandpa Jim receiving our thoughtful items, smiling and waving to us in gratitude from the afterlife?

Even I, in all my faithful Christian upbringing, couldn’t help but buy a few Tomb Sweeping knick-knacks from one of the sellers.  Mostly, it was in appreciation for allowing me to take as many photographs of her wares as I wished.  However, I must admit that, in the back of my mind, I was thinking, “You know, Grandma Marie would really love to wear this flowery, purple tissue dress for her Easter Sunday in paradise.” 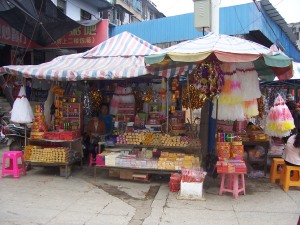 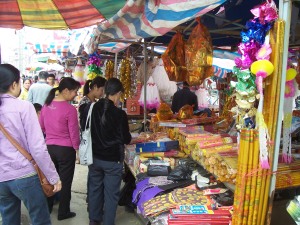 Consumers decide which items to buy to honor their deceased loved ones.

His and Hers wardrobe with accessories? 65 cents each.

How about this cellphone gift package for Grandpa?

Assembly is required for most paper objects. This seller taped together these palatial palaces and is bringing them to his stall to be sold.

A happy Qing Ming Jie proudly seller displays one of her newly cut tissue outfits she did herself.

Even I, in all my Christian upbringing, couldn't help but buy some Tomb Sweeping items. See Grandma Marie's pretty flowery purple dress?