The Year of the Dragon Approaches!

Note:  The following entry was written as an article for my hometown area newspapers.  I’ll include it here for those interested, as well as the photos for the text at the end.  Enjoy!

In America, our biggest holiday season is December.  Preparations for Christmas and New Year’s begin the day after Thanksgiving and careen wildly onward until January 1st .   The New Year then sends us scurrying back to work and our usual mundane routines.

Yet in China, January 1st signals not the end of the holiday season but the exciting rush leading up to Spring Festival, what Westerners know as Chinese New Year.

The Chinese New Year, a 15-day celebration, is based upon the lunar calendar.  It starts with the New Moon on the first day of the new year and ends on the full moon, 15 days later.  The 15th day is called the Lantern Festival, which is celebrated at night with lantern displays along streets and in city parks.

Each New Year is also associated with one of the 12 animals of the Chinese zodiac.  These animals, in their yearly order, are as follows:  the rat, ox, tiger, rabbit, dragon, snake, horse, goat, monkey, rooster, dog and pig.  Last year was the Year of the Rabbit, celebrated on February 3rd. This year, Chinese New Year falls on January 23rd and officially ends on February 4th, where the Year of the Dragon will grandly begin its reign for 2012.

So when exactly does the excitement begin for China’s biggest celebration of the year? It starts with our Western New Year.  January 1st, a designated one-day holiday in China, becomes the equivalent of the America’s Black Friday.  Shoppers swarm into their local business centers for major spending ventures all leading up to Spring Festival. 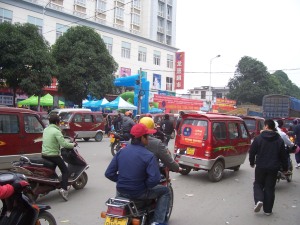 The streets of Longzhou on January 1st are crowded with shoppers. 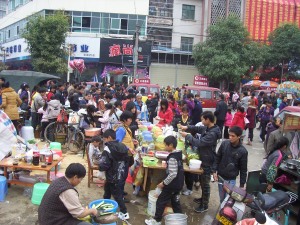 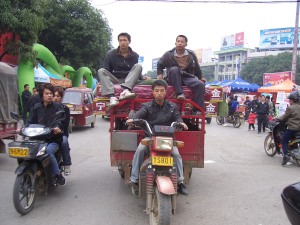 Buying new is important. These 2 mattresses are being hustled off to their new owners who took advantage of holiday sales.

ATM machines and banks are overrun with eager Chinese, pulling out funds for holiday purchases and gifts.  Grocery stores in small towns and big cities fill their aisles with assorted wrapped candy, New Year’s decorations and specialty food items.  Shops put together festive gift packages of liquor and cigarettes for men, overseas’ cosmetic items for women.  Clothing sales can be found on every street corner, enticing everyone to build up that new wardrobe for the warmer weather ahead. 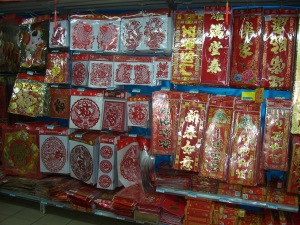 Bins of candy appear for the upcoming holiday. Candy of all kind is always a favorite for Chinese New Year.

Meanwhile, millions of migrant workers begin their travel plans to return to their small villages and towns for their yearly visit home.   A majority of these are uneducated farmers from the countryside who left their families to tend the land while they went to work in the cities as factory and construction workers. While poorly paid, making $200-350 a month and working 12 or more hours a day, the much-needed income allows them to send money home to support spouses, children and aging parents.   Chinese New Year is the only time they allow themselves a short 5-to-10 day break to return home and reconnect with loved ones.

For years, this migration of tens of millions has always been a major headache for transportation officials in China.  Train and bus services handle the bulk of these travelers as air travel is quite expensive, only used by those who have ample incomes to afford it.

In the past, tickets could only be purchased at the stations and not reserved.  Crowds were horrendous and lines were literally days long while exhausted workers waited their turn at mobbed ticket windows.  Recently, with better organization and computer technology, tickets are now able to be reserved, either by phone or in person.

And just this year, the first online ticket purchasing for trains has been added to help reunite migrant workers with their families.  According to the Chinese rail ministry, 5.88 million train departures a day throughout the country will be taking place from now until the end of the holidays.  Online booking is to help train passengers fill those millions of seats with ease, although I heard the train booking website was struggling under 1 billion hits a day when it first opened.  Frustrated individuals were logging on only to find the site had crashed, too overwhelmed to accommodate the 1 million-a-day hits originally expected.  That has since been remedied, according to reports, although final booking can still take a few days of trying due to the volume of website visits.

Aside from migrant workers, there are others who are anticipating the Chinese New Year as a time for rest and relaxation.  Schools all across the country have ended their winter semesters and will be starting up again February 5 or a bit later.   White collar company workers usually receive 3 to 5 days of vacation from their work units, although some might receive more depending on their bosses. Family businesses (such as convenience stores and novelty shops) sometimes close for 3 days but many remain open, taking advantage of those out and about wishing to spend their money.

The most exciting shoppers at this time are the children, who receive money gifts from relatives.  These monetary gifts are called the hong bao (red envelope) because the money is placed in decorative red envelopes.

College students also receive the hong bao, which many use to help pay for their tuition and further education costs for the spring semester.  At my small 3-year college, for instance,  $800 is required for the school year.  This is sizably cheaper than American higher education institutions but by no means cheap for the Chinese.  A majority of my students are from farming families whose parents live off the land and have no steady income.  Extended family members then become a major source of their college funding, which often comes in the form of the Spring Festival hong bao.  Unlike American students, who might blow their holiday gift money on vacation trips or fancy gadgets,  my students return from their holidays, head straight for the bursar’s office and make sure that hong bao money is put to good use:  paying for one more semester of college study.

By far, the most important custom for Spring Festival is the gathering of family members and friends to eat, drink and be merry.  “Gongxi, gongxi! (goh-ng shee, goh-ng shee)” or “Congratulations! Congratulations!” is the greeting given to everyone.  The meaning of the phrase is to congratulate one another on the new year, which will hopefully bring good luck, fortune and happiness to all.

After eating a huge meal, card games and mah-jong are played in living rooms while children light firecrackers outside.

Overseas’ fans of the Chinese New Year can easily enjoy such televised events online.  In fact, the 2012 CCTV (China Central Television) New Year’s Gala can be seen in both Chinese and bilingual versions by visiting the website english.cntv.cn.  The homepage guides English speakers through holiday shows, schedules and programming, including Year of the Dragon performance celebrations

For anyone in the US wishing to experience a little of their own 2012 Chinese New Year, I suggest heading over to your local Chinese restaurant.  Wish your Chinese hosts “Gongxi, gongxi! (goh-ng shee, goh-ng shee)”.  Partake of a hearty meal, one equivalent of a huge family dinner in China.  And don’t forget to check out the online CCTV gala broadcasts.  It’s all a great way to understand and embrace a unique culture a bit different from your own. 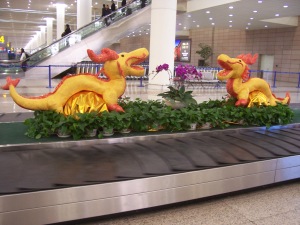